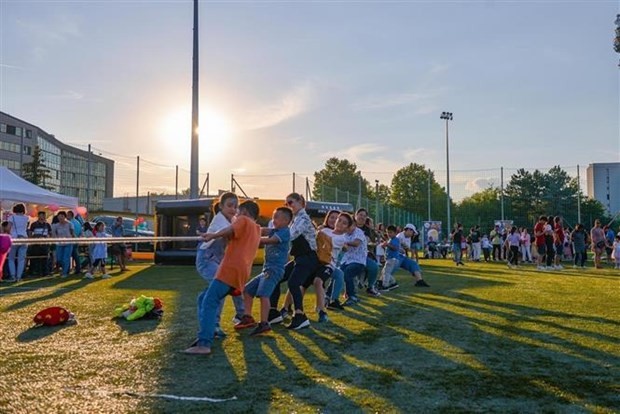 Children competing in the tug of war - a folk game of Vietnam (Photo: VNA)

It was the first Mid-Autumn Festival after a two-year suspension due to the Covid-19 pandemic.
Various folk games and music performances were organised, attracting not only Vietnamese participants but also Hungarian friends. They also had a chance to enjoy numerous traditional Vietnamese dishes, such as “bun cha” (grilled pork with noodle), “goi cuon” (spring rolls), “nem ran” (fried spring rolls) and “che” (a Vietnamese sweet dessert).
The Vietnamese association and Embassy of Vietnam in Hungary took the occasion to honour 95 Vietnamese students for their excellent academic performance in the 2021 – 2022 school year. 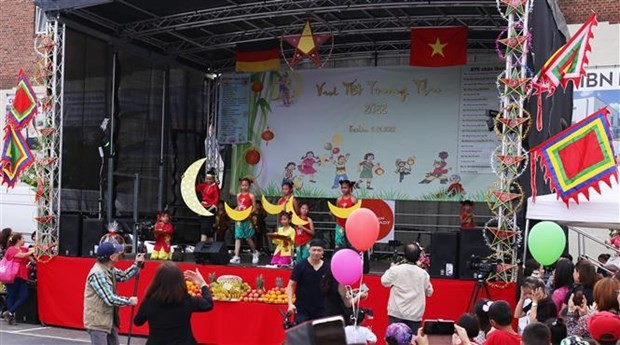 An art performance in Mid-Autumn Festival in Berlin. (Photo: VNA)

Meanwhile, thousands of children, who are second and third-generation Vietnamese living in Germany’s Berlin, on September 11 gathered at Dong Xuan Centre for the Mid-Autumn Festival.
The organisers prepared about 3,000 gift packages and thousands of star lanterns imported from Vietnam for children at the event.
Minister Counsellor of the Vietnamese Embassy in Berlin Chu Duc Tuan praised the organisers for holding such a meaningful event for Vietnamese children. He also expressed his delight that the Mid-Autumn Festival, a traditional custom of Vietnamese, has been preserved in Berlin, the heart of Germany.
He also thanked local authorities for their support for the Vietnamese community here and enabling them to maintain and promote traditional culture for the next generations.
It demonstrated the practical and effective implementation of the Vietnam – Germany strategic partnership, Tuan said.