The event, held via videoconference, was co-chaired by Vietnamese Deputy Prime Minister and Minister of Foreign Affairs Pham Binh Minh and Cambodian Deputy PM and Minister of Foreign Affairs and International Cooperation Prak Sokhonn.
With the exchange of the ratification documents, the 2019 Supplementary Treaty and the protocol on land border demarcation and marker planting, which were signed on October 5 last year and recognised the result of the Vietnam-Cambodia land border demarcation and marker planting, about 84 percent of the total workload, officially took effect from December 22, 2020.
The 2019 Supplementary Treaty and the protocol’s entry into force is considered a big success of both countries as they hold great significance during more than 36 years of handling land border-related issues between the two countries, helping to lift bilateral relations to a new height and reflecting the motto of “good neighbourliness, traditional friendship, comprehensive cooperation, and long-term sustainability” as agreed on by their senior leaders.
That these two legal documents came into force demonstrates the resolve, goodwill, and efforts by both Vietnam and Cambodia in jointly dealing with common border issues. 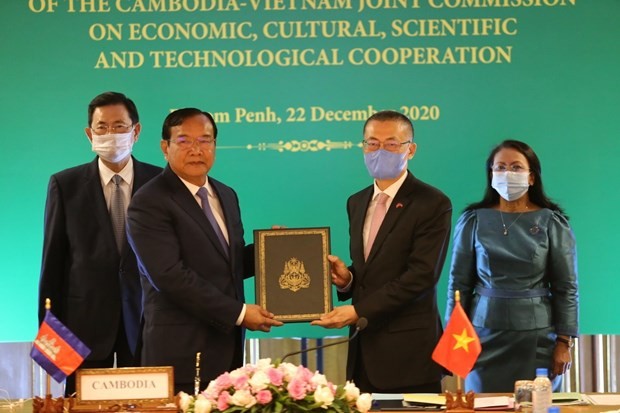 The 2019 documents, along with the 1985 Treaty on the Delimitation of National Boundaries and the 2005 Supplementary Treaty, will serve as the fundamental legal framework for the management, protection, and development of the Vietnam-Cambodia land border in the new context, thereby firmly safeguarding security, defence, and social order and safety in border areas and helping to foster development cooperation, friendship exchange, and improvement of local living standards.

This will provide the basis for building the Vietnam-Cambodia land border into a border of peace, stability, cooperation, and sustainable development, thus contributing to the reinforcement of ASEAN’s solidarity and the promotion of the bloc’s prestige and stature in the world.

In the time ahead, the two countries are set to work closely together to soon hand over and manage the borderline and border markers in conformity with the protocol on land border demarcation and marker planting. They will also continue negotiations to draft international treaties on border and border gate management regulations and handle the remaining part of the borderline, about 16 percent, on which border demarcation and marker planting has yet to complete.