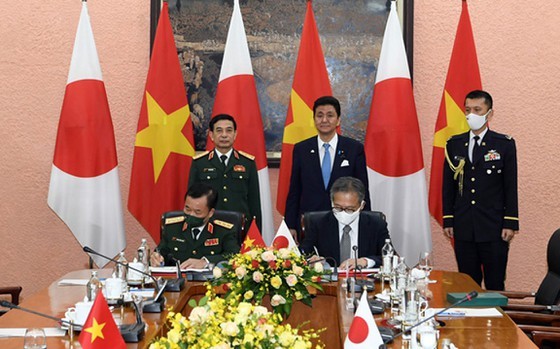 Defence Minister General Phan Van Giang and Japanese Defence Minister Kishi Nobuo witness the signing ceremony of the agreement on defense equipment and technology transfer between Vietnam and Japan on September 12 (Photo: Ministry of Defence)
Host and guest held talks following an official welcome ceremony in Hanoi on September 11, during which Giang spoke highly of the first overseas trip by his guest, while the visitor highly valued Vietnam’s recent achievements in national building and defence.
The two sides spoke highly of the bilateral defence ties over the recent past; exchanged ideas on regional and world situation of mutual concern, including the importance of freedom to navigation and aviation in the context of the complex developments in the region. They reaffirmed the need for the compliance with international law, including the 1982 United Nations Convention on the Law of the Sea (UNCLOS 1982), and exchanged experiences in the fight against the Covid-19 pandemic of each other’s army.
The two ministers also exchanged ideas on the orientations for the Vietnam-Japan defence cooperation in the new period and welcomed the signing of the agreement on the transfer of defence technology and equipment.
They agreed that the two sides will closely collaborate in the implementation of programmes within multilateral and regional mechanisms, and actively push cooperation activities to make active contributions to peace, stability and development in the region and the world over.