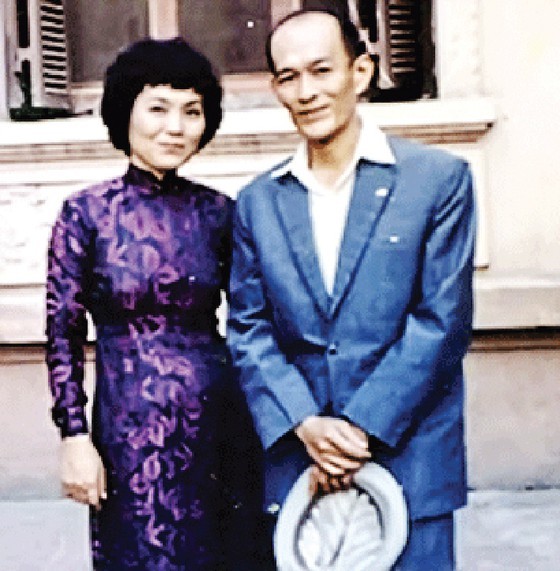 Mrs. Nakamura Nobuko and her husband, agronomist Luong Dinh Cua, when they were young.
Fate brought these two people together, and they built a beautiful love and a beautiful family. And his great career, with all his dedication to science, had created the golden crops, fragrant flowers, and sweet fruits in Vietnamese fields. His aspiration seems to have always beckoned and ignited the fire in the hearts of young people of successive generations.

They met each other when he was an international student at Kyushu University in Fukuoka, Japan. She married him in October 1945, at the age of 22, while she was working in the laboratory of Kyushu University. At that time, he was a poor student who could not afford a wedding gift for his wife. His mother-in-law cooked for her daughter's wedding ceremony by herself. In 1946, he went to Kyoto to study Agriculture and graduated with first-class honors. He successfully defended his Ph.D. thesis on genetics to create new rice varieties. He was the 94th person in Japan to receive the highest degree in agronomy from the Meiji era until then.

He declined to go to the US for a Ph.D. studentship and an invitation to work at the International Rice Research Institute (IRRI) to find a way to return to Vietnam to join the war. After many attempts, he brought his family back to Saigon in 1952 and moved to the North in 1954. Since then, she understood the suffering of Vietnamese farmers and experienced the difficult life of the period of ration stamps, evacuation, and bombs of war.

During their years in the North, he worked at the University of Agriculture, then became the Director of the Field Crops Research Institute of the Ministry of Agriculture. There were a few years when he worked in Thanh Hoa Province. Meanwhile, she worked at the Voice of Vietnam, translating and reading Japanese, answering letters from Japanese listeners, and introducing Vietnam. She said that she still vividly remembered the radio broadcast on April 30, 1975, when she read the news with overwhelming emotion “The Ho Chi Minh campaign was completely successful. Saigon City was completely liberated”.

On the day of liberation, he arrived at Lam Dong Province and was present in Saigon in time for the joy of victory. After that, he also had trips to Can Tho to prepare for the agricultural development plan in the Mekong Delta. When there were only two days left to move his family to the South, he suddenly suffered a heart attack and died on December 28, 1975, in Hanoi. After burying him, she took their children to Saigon. At first, she worked at the Department of Foreign Trade in the context of the embargo. After that, she returned to Japan to set up a company to help Vietnam export goods, earn more foreign currency, and import raw materials, contributing to the recovery and development of industrial production in the city. Of their five children, three work in agriculture. All of them are gentle, neither talk about their father's merits nor themselves. They always keep their dignity and kindness and are always afraid to trouble others.

Due to old age, she could neither return to Japan to visit her beautiful cherry blossom home country for nearly ten years nor her husband's hometown in Dai Ngai Town in Soc Trang Province.

She always said that living in Vietnam was comfortable. Vietnamese people are brave and smart and do not discriminate against foreigners. For 30 years as the wife of Dr. Luong Dinh Cua, she felt they were made for each other. He always shared housework with her, cared for their children, and encouraged her to study more foreign languages. She admired him because he was good at his profession, fluent in English, French, and Japanese, and even knew a little bit of Cantonese.

She was always proud of him, a pioneer in agricultural experimentation, guiding the embankment of fields and planting rice in straight lines for high yield. He was the creator of many rice varieties suitable to the soil, sweet potato, papaya, melon, cactus, water spinach, and seedless watermelon, contributing to the development of Vietnam's agriculture during an extremely difficult period.

Her name was attached with his name, a scientist working in the fields, creating new rice varieties that helped the Northern rear achieve a record of 5 tons of rice per hectare at that time. He was granted the Hero of Labor in 1976 and the Ho Chi Minh Prize in 1996. Many schools and streets bear his name across the country. Especially their children and grandchildren have seen them as legends and fairy tales and very close and dear examples.

She said that her life was always happy because she had faith in herself and was always optimistic. She loved the Japanese proverb "Ashita wa ashita no kaze ga fuku" (the winds of tomorrow will blow tomorrow). When she was still healthy, she operated for the Luong Dinh Cua Award, an award founded by the Central Youth Union in 2006 to give to rural young people who are outstanding examples of labor and creativity every year. According to her, young people must understand history and war to treasure the value of peace.

In a meeting with her, she said she would follow the life trajectory he had experienced and hoped to meet each other at the last station.

She became much weaker in her last two years, but she was still sharp and could recognize her children and grandchildren. Now she went to his place when she just turned 100 years old. Farewell Mrs. Nakamura Nobuko - a sincere and beautiful woman.