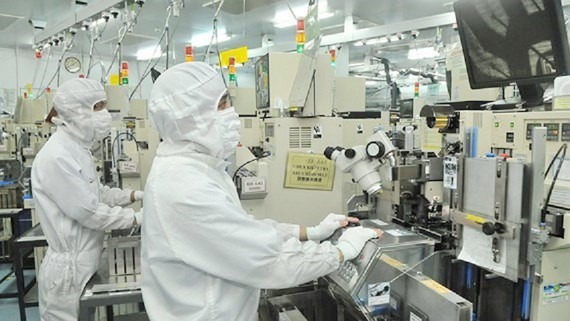 A Japanese enterprise in Vietnam (Illustrative photo:  SGGP)
In a research & strategy insight, the pair said Vietnam’s successful integration into the Association of Southeast Asian Nations (ASEAN) was key to igniting its trade engine. The nation’s membership in the bloc since 1995 has allowed it to enjoy zero tariffs when trading with other ASEAN member states. Vietnam also signed free trade agreements with other major economies including China, the European Union, the UK, and Japan, creating a fertile environment for trade relations to grow.

In addition, a rapid increase in manufacturing competitiveness has also contributed to Vietnam’s rise as a regional export powerhouse, with manufacturing value-added increasing by the most in the past decade.
The economists noted Vietnam has also been very successful in attracting foreign direct investment (FDI), thanks to favourable government policies. By 2020, the number of industrial parks in the country had grown to 369, an increase of 180 percent from 2005.
According to the insight, the Vietnamese government offers a variety of tax benefits and streamlines regulations for foreign entities. This has been reflected in an impressive gain in Vietnam’s ranking in the World Bank’s “ease of doing business” index – up 23 places to 70 from a decade ago.