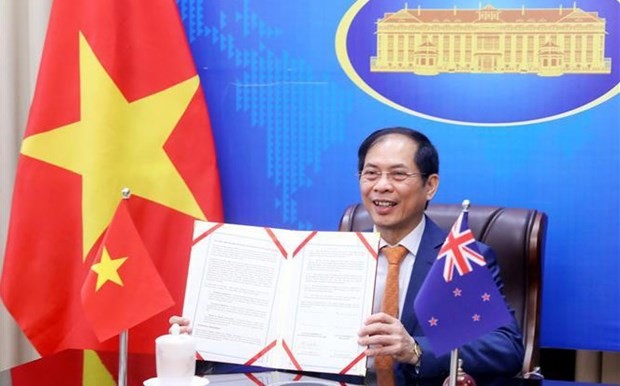 At the outset of the trip at the invitation of New Zealand Minister of Foreign Affairs Nanaia Mahuta, Trung informed the press that it is Son’s first official visit to the nation and the first ministerial visit by a Southeast Asian country to New Zealand since it opened the border on August 1.
On the occasion, the ministers will co-chair the first face-to-face meeting of the annual foreign ministers' meeting (FMM) mechanism under an action plan to implement the Vietnam-New Zealand strategic partnership framework for 2021-2024.

The action plan was inked in December 2021, focusing on strategic links formation, economic integration, and people connection. As a result, a series of activities and meetings in the fields of agriculture, defence, diplomacy, trade-industry and cooperation among localities have been organised since the beginning of 2022 despite the Covid-19 pandemic.

New Zealand’s official border reopening has allowed the sides to conduct delegation exchange activities in education, economy - trade and investment, judicial cooperation, information and communication, and tourism in the last months of the year. 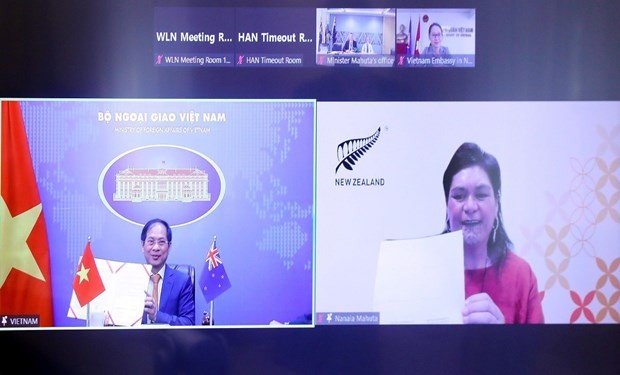 In addition, while in New Zealand, the Vietnamese FM and local officials will discuss the preparation for delegation exchange activities between senior leaders of the countries, Ambassador Trung noted.

According to the diplomat, the visit takes place in the context that both nations have opened their borders and are making efforts to reconnect with the outside world after more than 2 years of dealing with the pandemic. They share the common interest of quick economic recovery and development, consolidating and diversifying international relations, given the fact that the political, security and economic environments in the world and Asia-Pacific are experiencing many changes this year.

Through the trip and associated meetings by Minister Son with senior leaders of New Zealand, Vietnam affirms its desire to strengthen and deepen the strategic partnership to be commensurate with the nations’ high level of political trust and goodwill, said Trung.

He stated that Vietnam is also determined to cooperate more deeply with New Zealand in accordance with the spirit of the agreement on establishing their strategic partnership signed on July 22, 2020, on the occasion of the 45th anniversary of their diplomatic relations.

Trung stressed New Zealand is one of Vietnam's important partners in trade and official development assistance.

Notably, New Zealand freshly offered Vietnam an economic recovery aid worth NZD2 million. The two sides are working to tap new opportunities in development cooperation with a focus on their new priority areas such as green growth, digital transformation, and digital economic development.