Online newspaper Events Magazine ran an article titled “2016-20 term: Vietnam's relations with the Middle East - Africa and Egypt rise to new heights”, in which journalist Ahmed Hassan noted that the Congress is “an important political event that takes place every five years, attracting the attention of public opinion inside the country and the world”.
Over the past five years, under the leadership of the CPV, Vietnam overcame many challenges and made special economic achievements, thus raising the country's role and position in the international arena. 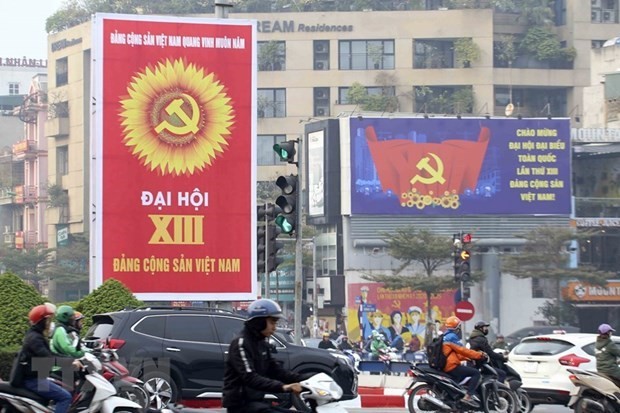 A street in Vietnam is docked with banners and posters celebrating the Congress (Photo: VNA)
On the international arena, Vietnam's partners are increasingly diverse, with the relationship between Vietnam and the Middle East - Africa in general and bilateral ties between Vietnam and Egypt in particular elevated.
According to the article, the year 2020 - a very special year, as Prime Minister Nguyen Xuan Phuc said, should be considered the most successful year in Vietnam in the past five years in terms of spirit and will to rise in all difficulties and challenges, a year in which the people's confidence is higher.
While the majority of countries had negative growth or entered a recession due to the negative impact of the COVID-19 pandemic, the Vietnamese economy was still growing by 2.91 percent, and Vietnam is in the group of countries with the highest growth rate in the region and in the world, it said.
Regarding to foreign affairs, the article said, Vietnam has also made remarkable achievements by connecting and enhancing friendly relations, cooperation and confidence between countries inside and outside the region in the context of geopolitical instability. The author attributed the results to the CPV’s strategic orientations.
In order to overcome difficulties, cooperation between Vietnam and the countries in the Middle East and Africa in recent times witnessed positive steps of development in numerous sectors, the article underscored, adding that political-diplomatic relations between Vietnam and the countries in the region have continued to be strengthened and expanded.
In the relationship between Vietnam and Egypt, despite the negative impact of COVID-19, trade exchange between Vietnam and Egypt in 2020 remained stable compared to previous years and is expected great growth prospects in the coming years, according to the article.
The success of the 13th National Party Congress is not only significant to Vietnam's development in the coming years, but also opens up new prospects for further promoting relations between Vietnam and countries in the Middle East - Africa, including Egypt.
Another article, published by Elwatan News, praised Vietnam’s Renewal achievements under the CPV leadership. It said after more than 35 years of implementing the Renewal process, Vietnam has grown itself into a developing nation with middle income, a dynamic market economy that is rapidly integrating into the world. 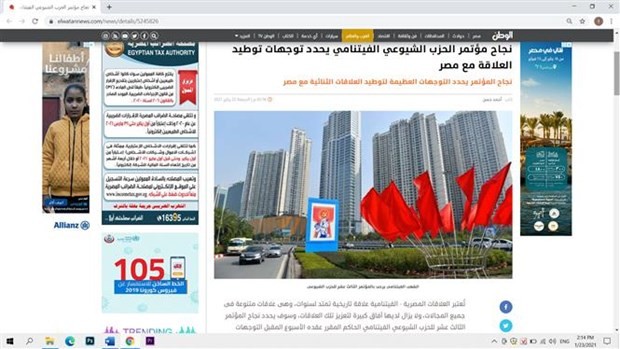 The article published by Elwatan News (Screenshot photo: VNA)
Along with the implementation of the Renewal policy, Vietnam has actively participated in and contributed to most important international organisations and forums. In 2019, Vietnam was honored for the second time to be elected as a non-permanent member of the United Nations Security Council for the 2020-2021 term with an almost absolute number of votes in the United Nations General Assembly.
The article attributed those achievements to the clear-sighted leadership of the Communist Party of Vietnam founded by President Ho Chi Minh.
It concluded the Party’s upcoming 13th congress in Hanoi is of paramount importance as it will chart a new course of development for Vietnam in the next five years and beyond.
Al Messa newspaper also reported the upcoming Congress, highlighting that this offers Vietnam an opportunity to study and discuss measures to foster reform and economic restructuring.
The 13th National Congress of the Communist Party of Vietnam will take place in Hanoi from January 25 to February 2.