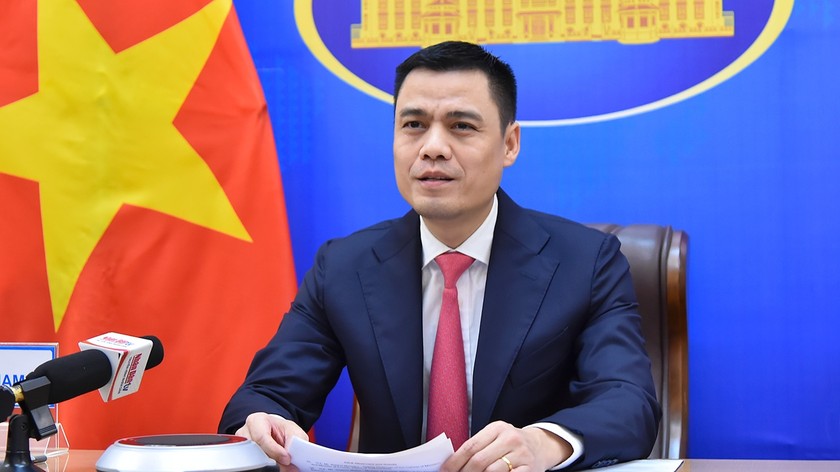 Deputy Minister of Foreign Affairs Dang Hoang Giang
The Deputy Minister made the remark while talking to the press about the results of the APEC Economic Leaders’ Week, during which Vietnamese President Nguyen Xuan Phuc attended the APEC Economic Leaders’ Meeting (AELM) via videoconference on November 12 under the chair of Jacinda Ardern, Prime Minister of New Zealand – APEC Chair 2021, and several other events.
Giang said President Phuc and the Vietnamese delegation had actively participated in main activities of the week, delivering Vietnam's consistent message which affirmed that APEC continues to be a regional forum with a significant voice and role in promoting multilateralism and multilateral cooperation to overcome the Covid-19 pandemic, achieve rapid and sustainable economic growth, thus continuing to be a driving force of regional and global economies.
According to him, Vietnam’s messages are very in line with APEC leaders’ opinions, including facilitating fair access to vaccines, medical supplies and resources as well as adopting stronger measures to fight the pandemic. About development, Vietnam suggested APEC take a new vision and approach to economic recovery such as promoting digital economy and e-commerce, advocating trade liberalisation; removing trade barriers to restore production and trade, and prevent disruption in manufacturing chains.
As the Asia-Pacific and the world are suffering consequences and challenges caused by climate change, the requirement is to ensure green growth. Therefore, measures and suggestions proposed by Vietnam along with the country's delivery on commitments also contributed to strengthening APEC’s cooperation in promoting green and inclusive growth, he said.
The diplomat stressed that the most important thing is to effectively carry out the APEC Vision till 2040. He said Vietnam was one of the key participants in building the vision and also one of the leading members in realising the vision via building an action plan.
The official expressed his belief that the commitments of Vietnam and APEC to realising the vision will contribute to building an Asia-Pacific region of peace, stability and prosperity.