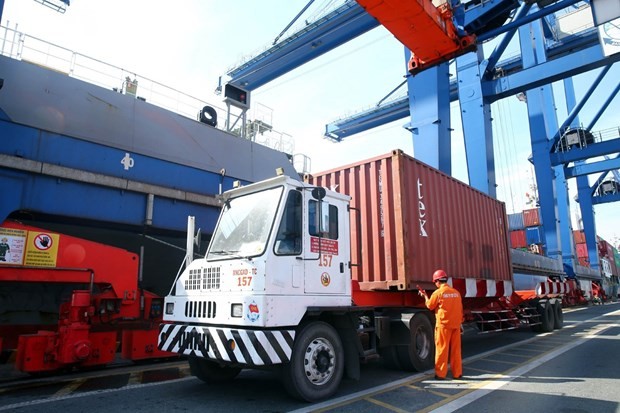 Illustrative image. (Photo: VNA)
Vietnam and Australia are both members of at least three free trade agreements, namely ASEAN-Australia-New Zealand Free Trade Area (AANZFTA), CPTPP and the Regional Economic Comprehensive Economic Partnership (RCEP).
According to data of the General Statistics Office of Vietnam, last year, two-way trade between Vietnam and Australia hit US$12.4 billion for the first time, up more than 49 percent compared with that of 2020. The value of shipments to Australia reached more than US$4.45 billion, a year-on-year increase of 23 percent. Vietnam spent nearly US$8 billion in importing goods from Australia, up nearly 70 percent against 2020’s figure.
Vietnam's exports to Australia are growing strongly, reaching US$1.38 billion in the first quarter of 2022, a surge of 32.36 percent against the same period last year.
Sharp increases were seen in Vietnam’s export of various agricultural and industrial products to Australia, for example 84 percent in coffee, 51 percent in aquatic products, 41 percent in rubber, and 26 percent in electric cable. Notably, the shipments of iron and steel skyrocketed by more than 500 percent year on year.
Meanwhile, the country is buying more and more essential materials from Australia, such as coal, iron ore, metals, cotton, wheat, and animal feed. In particular, Vietnam's import value of coal from Australia in Q1 surged 176 percent year on year and that of cotton shot up 333 percent.
The CPTPP also serves as momentum for bilateral cooperation in terms of investment. By the end of last year, there were about 550 Australian investment projects in Vietnam with a total value of nearly US$2 billion, ranking 19th among foreign investors in the country.
Graham Kinder, Vice Chairman of the Australia-Vietnam Business Council, was quoted by the newspaper as saying that Australian companies see many investment opportunities in Vietnam in the fields of trade, investment, education and transport that are Australia’s strengths, thus they are keen to promote their investments in Vietnam. Similarly, Vietnamese enterprises can expand their investment and business operation in areas of their strength in Australian states and localities.
It is now the right time for businesses of both countries to take advantage of opportunities for cooperation in the post-pandemic period as borders have been reopened and both governments seek to promote investment activities, he said.