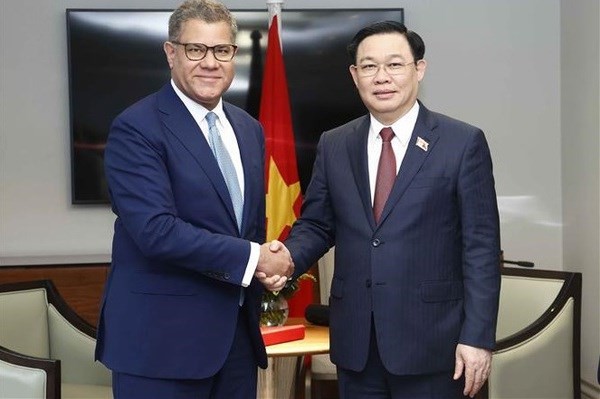 Sharma said he hoped Vietnam would make political commitments ahead of COP27 and at the highest level.

He said that British PM Boris Johnson and European Commission President Ursula von der Leyen had agreed to sign a letter to Vietnamese PM Pham Minh Chinh proposing the establishment of a Just Energy Transition Partnership between the G7 and Vietnam.

NA Chairman Hue highlighted that Vietnam was the first country to implement the Millennium Development Goals.

He said that commitments Vietnam made at COP26 were strong political ones showing the country’s determination to respond to climate change, reduce emissions, and switch to a green and circular economy.

Hue welcomed the G7’s selection of Vietnam as one of the three priority countries to receive support to promote the energy transition process to realise commitments at COP26.

Vietnam is determined to implement the obligations with the help of the international community, he said.

The country will continue to act promptly and firmly, especially in the energy transition and infrastructure development to adapt to climate change.

Hue underlined that the Vietnamese NA would promote its role in the law building, supervising and allocation of budget to ensure the implementation of Vietnam’s climate commitments at COP26, including the strengthening investment in research and development, the use of clean technologies and faster green growth.

Along with supervising the Government’s implementation of national planning, the NA has decided on budget allocation SDGs in green development and climate commitments, he said.

He added that Vietnam was likely to face difficulties and challenges during the implementation of the commitments, and underlined the significance of support from international partners, including the UK.

To reach net-zero emission by 2050, Hue proposed that Vietnam and the UK continue to strengthen collaboration in greenhouse gas emission reduction and climate change response.

He also asked for the UK to assist Vietnam in personnel training and provide Vietnam with financial and technical support to build a roadmap for transition to green and renewable energy.