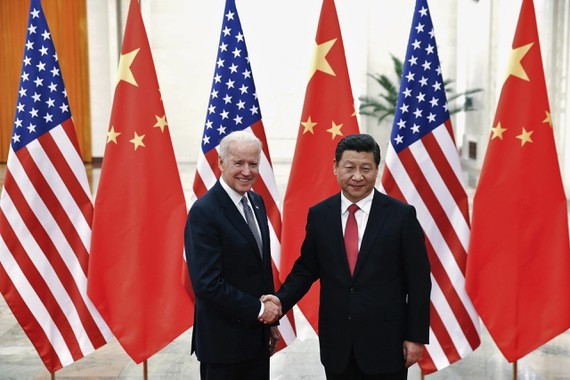 JOURNALIST: - Sir, do you think the USA will return to renegotiate the terms for the CPTPP deal with other countries?

Dr. VO DAI LUOC: - The question of whether the USA will return to the CPTPP deal or not is a matter of great concern, not only for countries that are members of the CPTPP but also for other ally countries of America. I think that although the US President Joe Biden wants to rejoin the CPTPP right now, there is also an overwhelming leaning towards multilateral Free Trade Agreements (FTAs). So in the short term, the US may not be able to renegotiate to rejoin the CPTPP. The reason is that the more Free Trade Agreements develop, the less are the chances of the US once again rejoining the CPTPP.

For instance, at present many countries are benefiting much more from FTAs because of more capital flow, and better markets, labor, and technology. However, voters in developed countries, like the US, believe that they are at a disadvantage because large corporations will lean towards the developing countries to take advantage of cheaper labor, growing markets, and preferential tax policies.

Former President Donald Trump launched the concept of fair and free trade, which is also how he sympathized with voters and had the support of his voter base. However, that which is fair is also not easy to do. Hence, although President Joe Biden wants to renegotiate the CPTPP for benefits to the US, it is unlikely he can do it at this time. The US still has many unresolved domestic issues that need to be tackled before thinking of rejoining the CPTPP, such as consent of congress on issues related to businesses and labor.

- Sir, will China be able to rejoin the CPTPP, given that its leaders have repeatedly expressed their will to do so?

- China has officially declared that they want to rejoin the CPTPP, but it is still a far cry from wanting and actually realizing. First of all, there are terms in the CPTPP that can be considered progressive, but also binding. If China wants to participate, they will have to reform very strongly, especially in their policy towards current state-owned enterprises (SOEs). The Chinese SOE block is too strong, and the Chinese SOE support and protection policy is also too huge. Therefore, the question arises if China will reform this policy to conform to the terms of the CPTPP. Besides this, there are also intellectual property rights and labor issues to upgrade.

Such reforms in China are not easily implemented, especially the policy of economic development, for which the Chinese prefer a very nationalistic approach. Therefore, in my opinion, both China and the US will not be able to participate in the CPTPP in coming time.

- Sir, there is also an opinion that the Regional Comprehensive Economic Partnership (RCEP) plays a key role in China, so they will put pressure on the US to return to the CPTPP soonest. What is your opinion on this?

- RCEP associates have long-term strategic interests with China and neighboring countries. This is also believed to be a factor that motivates the US under the leadership of President Joe Biden to rejoin the CPTPP. Besides, this agreement is the best tool for the US to deepen economic relations with the region. In fact, the US can still maintain flexibility in that it seek a narrower agreement with CPTPP member countries on topics such as digital trade, the environment, and climate change, or on the sale and purchase of medical equipment and other essential products. Such an agreement will help build trust and serve as a starting point for the US to rejoin the CPTPP.

- Sir, what are the trends in US trade policy under President Joe Biden?

- I think that the trade policies will still serve the long-term strategies of the US. It will be a reassertion of their position as a world leading power, and show control over emerging nations that threaten America's superpower status, of which China is number one. The US trade policy under President Joe Biden may be both competitive and controlling, though it must also clearly define a restructuring of relationship on the basis of mutual benefits.

On a broader scale, the US wants to reestablish its own set of rules, rather than reestablish new global governance, including in trade. Although this global governance model is in context of a current multilateral world, the US still maintains its superpower status across the world, as well as over its core interests. The problem is how the new rules will be introduced by President Biden, which are still unclear, and only time will tell.