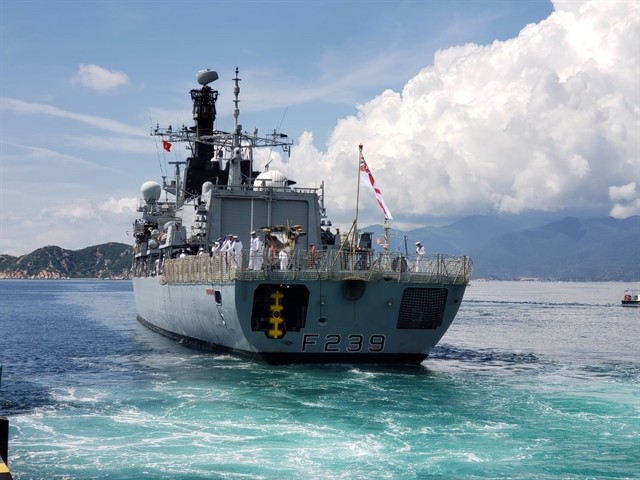 British Royal Navy ship HMS Richmond at Cam Ranh International Port, Khanh Hoa Province, Vietnam on Friday. — Photo courtesy of the UK Embassy in Vietnam
“The visit comes on the 10th anniversary of UK – Vietnam defence cooperation and just two months after the first-ever visit to Vietnam by the UK Secretary of State for Defence in July 2021. The ship's presence underlines the UK's commitment to the Indo-Pacific, at the heart of which lies the UK's partnership with Vietnam,” the announcement reads.
“We are excited to be visiting Vietnam. Our role is to demonstrate the UK’s commitment to a persistent and reliable presence in the Indo-Pacific, including crucial regional partners like Vietnam with whom we have numerous shared interests,” Captain Hugh Botterill, HMS Richmond’s Commanding Officer, said, adding that the interests include maritime security, sustainable development, climate change and a desire to see mutual economic growth.
British Ambassador to Vietnam, Gareth Ward said: “The UK and Vietnam are both maritime nations. We value freedom of navigation, based on the UN Convention on the Law of the Sea.”
He said that this was the 3rd visit by a Royal Navy Ship to Vietnam during his term, and that the visit “reaffirms the UK's Indo-Pacific tilt and our commitment towards expanding defence relationships with key partners in the region.”
Later in 2021, the two countries will hold their 4th annual bilateral Defence Policy Dialogue, he said.
“We recognise the importance of maritime security in the Indo-Pacific and the need to contribute to UN peacekeeping for global peace and security,” the diplomat added.
Present at the welcome ceremony on Friday were representatives from the Department of Foreign Affairs of Khanh Hoa Province, Navy Region 4, Border Guard, Cam Ranh International Port and the UK Embassy.
Group Captain Bea Walcot, the UK Defence Attaché to Vietnam presented the Nha Trang Naval Academy English language training material, as part of the Defence Cooperation Agreement between the two countries.
This visit of HMS Richmond, 133m long with a displacement of 4,812 tonnes, is part of a broader campaign of the Royal Navy in 2021 for the Indo-Pacific region, which is part of the UK's commitment to peacebuilding, maritime security, and regional prosperity.