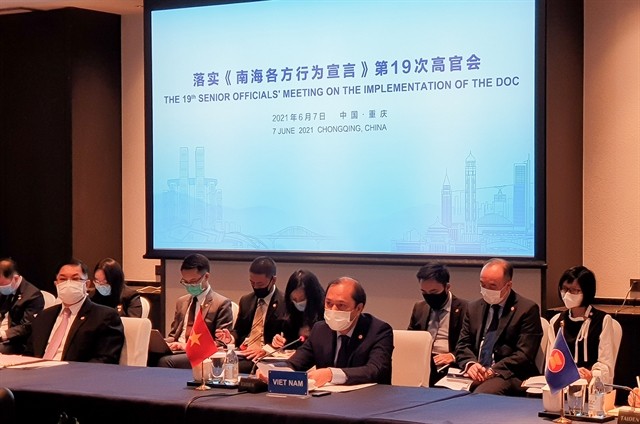 Deputy Minister of Foreign Affairs Nguyen Quoc Dung (middle) at the meeting. (Photo courtesy of the Ministry of Foreign Affairs)
The 19th ASEAN-China Senior Officials Meeting on the Declaration on the Conduct of Parties in the South China Sea (SOM-DOC) took place yesterday in Chongqing City, China, as part of the Special ASEAN-China Foreign Ministers' Meeting.
Vietnam’s Deputy Minister of Foreign Affairs Nguyen Quoc Dung led the Vietnamese delegation at this conference, which is the first meeting of senior officials since the SOM DOC-18 Conference in Da Lat City, Vietnam in October 2019.
The participating countries noted that despite the impact of the COVID-19 pandemic, ASEAN and China still made efforts to work together within the framework of implementing the Declaration on the Conduct of Parties in the South China Sea (DOC), including to protect the marine environment and ensure the humane and fair treatment of fishermen.
Countries have expressed concerns about the developments of the South China Sea situation in recent years, including unilateral activities that go against international law, erode trust, increase tensions, and slow the process of implementing the DOC and negotiating the COC.
At the same time, countries agreed on the importance of maintaining peace, stability, respecting freedom, security and safety of navigation and overflight, and peaceful settlement of disputes in the South China Sea in accordance with the provisions of international law and UNCLOS.
ASEAN and China committed to continue the implementation of DOC seriously, in good faith, fully and effectively.
Senior officials of ASEAN and China agreed to accelerate the COC negotiation process and direct the Joint Working Group to soon resume COC negotiations in an appropriate form. The countries said they wanted to achieve an effective and efficient COC in accordance with international law and UNCLOS 1982.
Speaking at the conference, Deputy Minister Nguyen Quoc Dung said although maintaining peace, stability and security in the East Sea is the common interest of ASEAN and China, there are still situations where unilateral actions are still taking place, infringing on the legal rights of the countries along the East Sea, increasing tensions and eroding trust, and going against the joint efforts of ASEAN and China.
He called on the parties to seriously implement the DOC and existing commitments, to comply with international law and UNCLOS 1982, to create a favourable environment for negotiations, and build a real COC document that will be of high quality, efficiency, conformity with international law, UNCLOS 1982 and be widely supported.