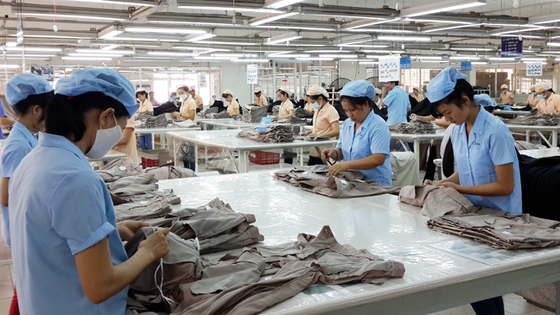 (Illustrative photo: SGGP)
With 17 free trade agreements (FTAs) whose negotiations have been completed or underway, Vietnam has become an open economy with a trade to GDP ratio of up to 200 percent.

According to the Agency of Foreign Trade under the Ministry of Industry and Trade (MoIT), Vietnamese firms have maximised advantages to boost exports and penetrate into new markets.
The country’s total export-import value rose from US$84.7 billion in 2006 to $545.3 billion last year. In the first 10 months of this year, the figure was $537.31 billion.
Vietnam has always recorded a trade surplus, from $1.77 billion in 2016, to $2.1 billion in 2017,  $6.8 billion  in 2018, $10.9 billion in 2019 and $19 billion in 2020.
The structure of exports has been improved significantly, with the turnover of processed industrial goods increasing from 80.3 percent in 2016 to 85.1 percent in 2019 and 85.2 percent last year.
Deputy Minister of Industry and Trade Tran Quoc Khanh cited a report by the WTO last year as saying that among the top 50 merchandise traders, Vietnam recorded the biggest increase in the world's rankings, leaping from the 39th place in 2009 to the 23rd position in 2019.
The numbers reflect that Vietnam is an open economy after joining the WTO and seriously realising its commitments, he stressed.
Moreover, the signing and implementation of FTAs have helped the country attract more foreign direct investment (FDI), creating momentum for the national economy, the official added.
Ngo Chung Khanh, Deputy Direrector of the MoIT’s Multilateral Trade Policy Department, said apart from reducing administrative procedures, the ministry will continue with the communication work to raise domestic firms’ awareness of the FTAs.
Notably, the ministry will speed up the building of the FTA Portal (FTAP), he said, adding that more than 20 ministries and agencies will join a working group to operate and upgrade the portal.
Deputy Minister Khanh affirmed that Vietnam will further promote trade policies comprehensively and synchronously to boost economic development in tandem with sustainable development.
Vietnam will work harder to effectively implement the present international commitments and FTAs, while seeking potential partners to conduct negotiations on new FTAs, thereby helping to expand trade ties in the future, he said.