Vietnamese tourists to travel again to RoK with C-3 visa 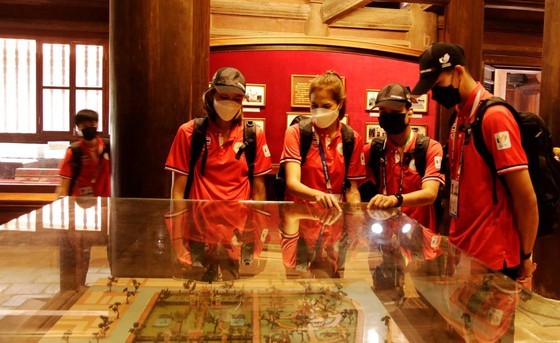 Foreign visitors at a museum

Statistics also show that Korea and the US are the two markets with the most visitors. Approximately 28.6 thousand Korean travelers flocked to Vietnam, up 195.1 percent over the same period while 231,000 American holiday-makers arrived in Vietnam, up 2,106.4 percent.

In Southeast Asia, Cambodia has received 10,300 tourists, a very strong increase of around 4,255 percent while its neighboring country - Laos welcomed 6,800 international visitors, an increase of 76 percent. After Singapore after lifting travel restrictions with Vietnam, the number of visitors increased very quickly. In April alone, 5,300 tourists traveled to Vietnam, an increase of nearly 10 times compared to the previous month. Approximately, 6,300 Singaporeans have come to the country.

Also in May, when Vietnam hosted the 31st Southeast Asian Games (SEA Games 31), the number of international visitors increased even more. According to the Vietnam National Administration of Tourism, foreign travelers decided to arrive at destinations such as Ho Chi Minh City, Hanoi, Phu Quoc, Da Nang, Nha Trang, Hoi An, Da Lat…

According to the latest report of the World Economic Forum, Vietnam has the highest score increase among 117 economies in the world, up 8 places in the ranking of the Tourism and Travel Development Index in 2021. Score Vietnam's number increased by 4.7 percent, while the world average growth was only 0.1 percent.

Local travelers also increase during summer vacation
Being one of the venues for many competitions, during the 31st SEA Games, Hanoi welcomed nearly 700,000 domestic tourists and 31,448 international tourists staying to visit and participate in the events. events of the Southeast Asian Sports Festival.

Generally, in the first five months of 2022, Hanoi welcomed over 6 million visitors, an increase of more than 2 times compared to the same period in 2021, of which international visitors were estimated at 126,000.

Recently, Vietnam's tourism industry has also received many positive signals for recovery and development after the Covid-19 pandemic. Many hotels and resorts in Vietnam have been continuously honored recently by  prestigious travel magazines and websites.

Specifically, Tripadvisor has just announced the world's top 25 hotels voted by travelers in 2022. Amongst them, the Hanoi-based Lotte Hanoi Hotel is the only representative of Vietnam, ranked in 13th place.

Similarly, Travel + Leisure magazine has just announced the list of 500 best hotels in the world in 2022, with the participation of Six Senses Con Dao in the Southern Province of Ba Ria - Vung Tau and three other representatives of Vietnam.

By Mai An - Translated by Anh Quan