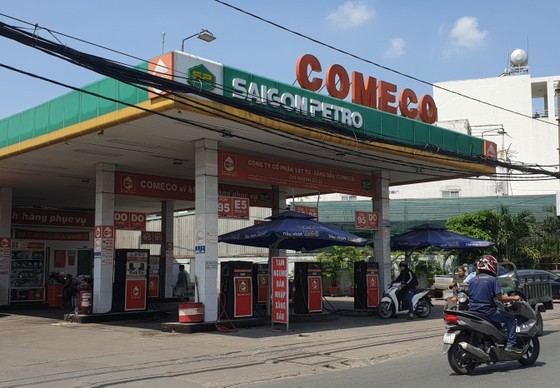 A Comeco petrol station in Go Vap District runs out of stock on October 31. (Photo: SGGP)

Only State-owned gas stations still have stock, while private or franchised gasoline stations are almost out of stock.

Specifically, there are five petrol stations in Phan Huy Ich and Pham Van Chieu streets in wards 12 and 14 of Go Vap District and Ward 15 of Tan Binh District. At 10.30 am, only Petrolimex still sold gasoline unlimitedly, but due to a large number of customers, people had to wait hours to refill. Meanwhile, two gas stations of Comeco hung signs saying they were out of gas and were replenishing stock. The remaining two gas stations used barriers to divide the entrance for customers because only one or two petrol pumps were still in operation.

In Quang Trung Street in Go Vap District and Nguyen Anh Thu Street in District 12, a military petrol station and Petrolimex was crammed with people waiting for a refill, while five petrol stations on the same route, including Comeco, stopped selling because of running out of stock or setting up barriers in order to sell a limited volume of gasoline to motorbikes.

Similarly, there are two petrol stations from the An Suong Intersection towards Cu Chi District, along National Highway 22, but they all hang ‘out-of-fuel’ signs. From the National Highway 1A towards Thu Duc Crossroads, many gas stations used barriers to create a way for customers to enter and only sold around VND50,000 worth of gasoline for motorbikes, and VND200,000-VND300,000 worth of gasoline for cars.

Hung, the representative of Petrol Station No.6 of S.T.S Petroleum and Logistics Service Joint Stock Company, said he did not know when the gasoline supply would restore.

Petrol stations in Dien Bien Phu and Nguyen Thuong Hien streets in District 3 also stopped operating from 10 a.m. on October 31. A large Comeco gas station in Le Dai Hanh Street in District 11 has six petrol pumps, but only one is still in operation.

In Binh Tan District, the petrol station at the corner of Kinh Duong Vuong Street and Ten Lua Street or some petrol stations in the section passing through the Mien Tay Bus Station area stopped working from 10 a.m. but still did not reopen until 2 p.m. This situation also spread in Thu Duc City, along National Highway 13, and Binh Thanh District.

According to SGGP’s reporter findings, this time, the gasoline shortage may be more severe than in previous times. Although fuel prices have increased two times, traders importing petrol products from key fuel wholesalers, such as Petrolimex or PVOil, are still complaining that they suffer a loss from VND2,500 to VND3,000 per liter. Not to mention that in the past, franchised traders were able to buy directly from key fuel wholesalers, but they have not received a single drop of fuel so far.

It is because the supply of key fuel wholesalers is only enough to provide for their subsidiaries. Therefore, second-tier traders must buy gasoline from these subsidiaries at a negotiated price if they want to have gasoline. As for agents and retailers, they have to purchase gasoline from second-tier and third-tier traders. Therefore, many private petrol stations are not interested in selling. 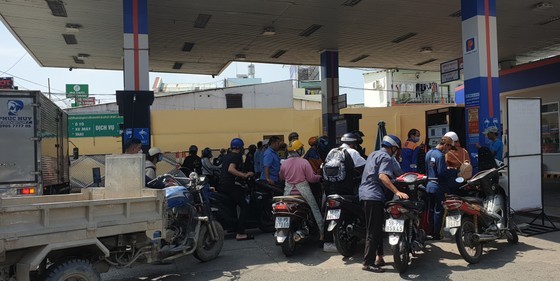 People wait for a refill at a gas station in District 7. (Photo: SGGP)
“The scarce supply of gasoline is more evident when now, traders have to send people to wait at the warehouse for a whole week for the delivery note. Unlike before, traders could receive goods receipt note with the required quantity a week before," said Nguyen Van Chinh, Head of a petrol station in Tan Phu District. A representative of the Department of Industry and Trade of HCMC said that from the beginning of October to now, especially in recent days, on average, about 9-10 percent of the gas stations have faced interruptions in supply due to temporary out-of-stock because some key fuel enterprises and traders have not been able to supply sufficient quantities. This situation is more common in suburban districts because most gas stations there are owned by small-sized enterprises, not doing business in chains or retail channels. The department affirmed that from now until after the Lunar New Year 2023, it would continue to monitor and closely follow the market situation and advise the HCMC People's Committee to have solutions to propose to agencies and the government timely remove difficulties.

Proposing to increase the costs to the base price

The Vietnam National Oil and Gas Group (Petrolimex) said that it has recently sent a report to the Price Management Department under the Ministry of Finance, requesting it to calculate and increase the costs included in the appropriate selling price to make up for incurred costs and ensure supply for the market.

According to Petrolimex's calculations, the actual import premium is much higher than the applied level in the base price. The cost of transporting gasoline from the refinery to the port has been adjusted since October 11, but it is still lower than the actual cost of VND40-VND60 per liter of gasoline and oil that the enterprises have to pay. In addition, with the normal business expenses in the base price, even though they have been adjusted from July 11, they are still lower than the actual average in 2021 by about VND184-VND598 per liter, equivalent to 13-39 percent of the retail petrol price and VND33 per liter, about 6 percent, compared to the wholesale price of fuel oil.

Besides the expenses that have not been properly and fully calculated since the beginning of this year, some expenses have increased unusually high. For example, the cost of petroleum business increased by VND649 billion, up 10 percent over the same period. Of which, the average transportation cost increased by 31 percent; outsourcing services increased by 65 percent due to the sudden high selling volume of petrol and oil; other service costs, such as land rental, caused the average cost to edge up by VND3 per liter; or the exchange rate difference made the average selling price cost rise by VND17 per liter.

Petrolimex proposed the Ministry of Finance promptly adjust and reflect costs on the base price in the nearest adjustment to ensure that the actual expenses incurred in the petroleum business can be offset to minimize the impact on business efficiency, ensuring supply for social demand. This enterprise also proposed to apply the cost of transporting gasoline from abroad to Vietnam in US dollars per barrel, instead of the absolute value in the base price, to appropriately reflect exchange rate fluctuations and periodically review the adjustment in the face of unexpected fluctuations.