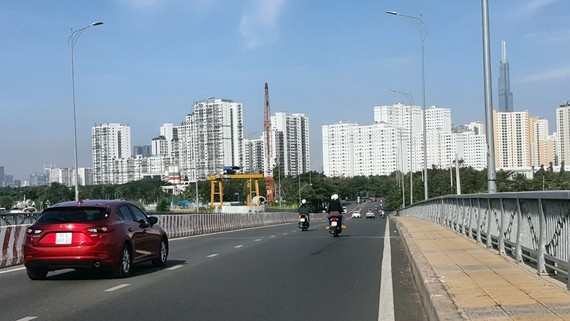 A corner of Thu Duc City

One of the two important national transport infrastructure projects, that will be submitted to the third session of the fifteenth National Assembly scheduled to take place on May 23 for consideration and approval, is the Ring Road 4 in Hanoi and the Ring Road 3 in Ho Chi Minh City after being consulted by the Politburo.

The Ring Road 3 is identified as an inter-regional ring road, connecting the satellite towns of Ho Chi Minh City with the southern key economic region in order to maximize the advantages of the city's neighboring provinces. Since then, the route will pave the way for the development of inter-regional transport services, contributing to socio-economic development.

Approved by the Prime Minister, the project is designed with eight lanes and parallel roads on both sides, with at least two lanes on each side.

The preliminary capital of the project is estimated at approximately VND75,378 billion (over US$3,2 billion) taken from public investment sources from central and local budgets. Of the amount of VND75,378 billion, VND41,589 billion will be spent on compensation and resettlement.

Moreover, the project is contributing to relieving traffic congestion and quickly connecting with urban areas in the eastern urban area of the city.

Additionally, because there is no special road for container trucks, trucks and all types of vehicles have to travel on the same road; as a matter of fact, traffic accidents often occur on the roads in and out of the port.

One of the traffic projects that is expected to create a breakthrough in the connection between HCMC's eastern part and the Southeast provinces, especially of Dong Nai Province’s Nhon Trach City is the Cat Lai bridge. According to the additional plan of the Prime Minister in 2017, the Cat Lai bridge has the starting point at Cat Lai - Thanh My Loi ward of Thu Duc City, Ho Chi Minh City, and the endpoint is about 1km from the existing ferry terminal in Phu Huu Commune of Nhon Trach District, Dong Nai.

Specifically, according to the option 1, the Cat Lai Bridge Construction project will have its starting point at the end of My Thuy intersection located on Nguyen Thi Dinh Street. The route coincides with Nguyen Thi Dinh Street to Cat Lai ferry wharf, crossing Dong Nai river to Nhon Trach District. After going to Dong Nai, the route coincides with the planned trunk road, cuts through the planned road 25C, and connects with the Ben Luc - Long Thanh expressway at the end of the project.

In addition, to relieve traffic pressure in this area, Ho Chi Minh City will deploy many infrastructure projects around the port such as expanding Nguyen Duy Trinh, Nguyen Thi Dinh, Dong Van Cong, and Vo Chi Cong streets. Moreover, the implementation of the second phase of the project of My Thuy intersection will be undertaken including the construction of an overpass for vehicles from Cat Lai port to turn left to the Phu My bridge and the Ky Ha 4 bridge for vehicles from Phu My bridge to turn right to Cat Lai port.

Currently, half of Hiep Phuoc port’s capacity is being exploited, but the path leading to this port is often congested, so trucks from the Mekong Delta provinces have to run to Cat Lai port to unload goods, making the road around Cat Lai port more overloaded.

The Long Thanh International Airport is one of the projects that is expected to promote socio-economic development for the region, changing the urban face of neighboring areas. This is also the project that the Government takes heed of most to accelerate construction progress.

Mr. Lai Xuan Thanh, Chairman of the Board of Directors of Airports Corporation of Vietnam - the investor of Long Thanh airport - said that after two months, workers work relentlessly with three shifts on the construction site of the project. ACV has planned to prepare VND36,000 billion in reciprocal capital for the project.

In 2022, it is expected that ACV will disburse about VND 8,500 billion for its sub-projects, mainly for the packages of leveling, passenger terminal construction, airport construction as well as technical design for this part as well as disbursement of site clearance for the connected transport system.

Deputy Prime Minister Le Van Thanh emphasized the tasks such as inauguration of the Long Thanh airport by 2025 with the focus on quality and adoption of measures to prevent waste during construction of this project with a capital of about $5 billion.

For traffic projects connecting with the airport, the Deputy Prime Minister asked the Ministry of Transport to coordinate with localities for the planning, ensuring the connectivity of the international airport with  with Ho Chi Minh City and other localities with the capacity of up to 100 million passengers a year.

Since 2013, the Prime Minister has approved 17 megacities in this area, but in the past time they have not developed as expected, due to lack of connection. For example, if a bridge connecting Ho Chi Minh City with Nhon Trach City in Dong Nai Province is built early, the city in particular and the socio-economic of HCMC and Dong Nai Province, especially the locality where the bridge is located will benefit most.