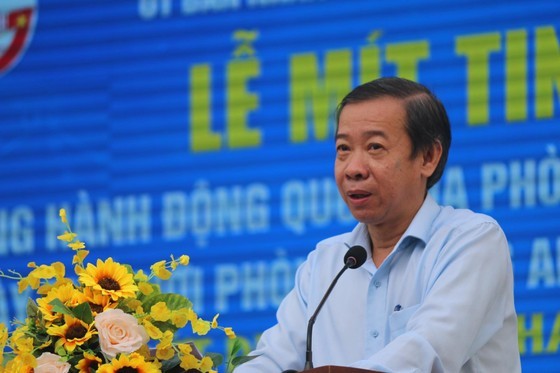 The Ho Chi Minh City Department of Health yesterday held a meeting in response to the National Action Month for HIV/AIDS in 2022 and the World AIDS Day.

Dr. Nguyen Van Vinh Chau, Deputy Director of the Department of Health, said that by September 2022, Ho Chi Minh City has detected an estimated 68,420 people living with HIV and 13,678 people dying of the disease of the century. Worse, currently, the trend of HIV transmission through sex is increasing; hence, the city will have difficulty ending the AIDS epidemic by 2030 as its goal.

According to Dr. Nguyen Van Vinh Chau, since detecting the first case in 1990, Ho Chi Minh City has made efforts to combine the comprehensive and effective implementation of social solutions and medical technical skills in HIV/AIDS prevention and control activities.

As a result, the development of HIV/AIDS disease in the city has been gradually controlled, and the number of new HIV infections, the number of HIV-infected cases turning to AIDS and deaths related to this disease has continuously decreased every year.

However, in recent years, cases of sexually transmitted HIV infection are increasing and have surpassed cases of HIV blood-borne transmission. This shows a potential risk that the HIV prevalence rate will be higher in the community.

However, he expressed his concern that in the context of reduced international funding, it will be a big challenge for HCMC to maintain the achievement of HIV/AIDS prevention and control as well as achieve the 95-95-95 target by 2025 to end the AIDS epidemic by 2030.

According to the Ministry of Health's data for the first 9 months of 2022, Vietnam has about 250,000 people infected with HIV. Nearly 220,000 people with HIV have been detected and are still alive. Over the past years, with efforts to implement effective solutions for HIV/AIDS prevention and control, Vietnam has reduced by more than two-thirds of new infections and the number of deaths from HIV/AIDS compared to ten years ago. However, medical workers warned of the complicated development of the HIV/AIDS pandemic and the high risk of a return.