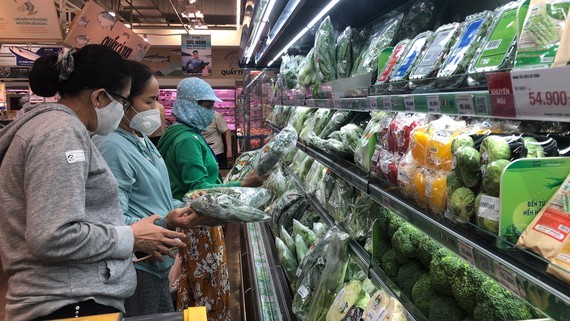 In mid-November, at Hoang Gia Seafood Store in To Hien Thanh Street in District 10 of HCMC, Shanghai hairy crabs were in great demand, although the price was nearly VND900,000 per kg. An employee of the store said that because the harvest season for hairy crabs was short, many people who wanted to eat them must place orders in advance. Not only hairy crabs, many other imported high-quality seafood products, such as King crabs with a price of more than VND2 million per kg, South Australian lobsters with VND2.4 million per kg, Western Australian lobsters with VND2.3 million per kg, and Korean halibuts with VND800,000 per kg, have also been available more and more at seafood stores.

To Thi Ngoc Bich, a resident in Go Vap District, said while choosing imported vegetables that imported products were more expensive than Vietnamese ones, but in return, she felt assured of the quality.

According to the representative of Emart Supermarket, for agricultural products from Korea, his unit imports them directly, whereas other products are often imported through partner companies. "Imported products are sold very well despite higher prices than Vietnamese ones," he revealed.

According to the MARD, in the first ten months of this year, Vietnam's import turnover of agricultural, forestry, and fishery products is estimated at US$35.6 billion, up 39.1 percent over the same period last year. Vietnam spent more than $1.2 billion to import vegetables and fruits from other countries, up 14.6 percent year-on-year, and $1.6 billion to import aquatic products, up 11.7 percent year-on-year.

Quality control needed According to Mr. Tran Van Truong, CEO of Hoang Gia Seafood International Trading Company, his company currently sells more than 50 kinds of fresh seafood imported from many countries, including Korean abalone, Australian abalone, Japanese scallop, Irish brown crab, Irish bulot snail, Canadian oyster, and American oyster. Before deciding to import a fresh aquatic product, the company must find out which foreign products can satisfy all conditions and standards, as well as whether they can adapt to the weather and environment or can live well during transportation to Vietnam. For some products that have never been imported to Vietnam, the company must ask permission to form a scientific council to present and give presentations on that type of aquatic product before the council of the Ministry of Agriculture and Rural Development (MARD). The process for the approval and licensing takes about 6-12 months. 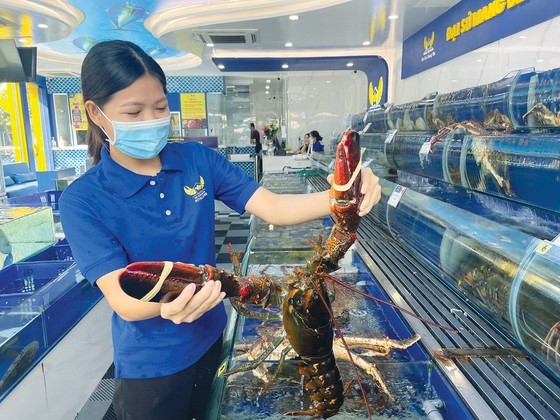 Imported seafood are sold at many stores. (Photo: SGGP)
“Thanks to Vietnam's participation in many FTAs with other countries, many foreign agricultural and aquatic products have also enjoyed import duty reduction, so their prices are now much less expensive than a few years ago. Because there is still plenty of room for development, the company is still constantly looking for new products to serve the needs of domestic consumers," Truong said. According to a Vietnamese enterprise specializing in importing foreign agricultural and aquatic products, the market for fresh foreign agricultural and fishery products has been extremely vibrant in the past two years. It is the result of Vietnam's participation in many FTAs. Recently, the volume of foreign agricultural and fishery products imported into Vietnam is on the increase because the consulates and trade representatives of other countries organized networking meetings, seminars, and trade promotions to introduce their products to Vietnamese consumers. Many embassies also regularly share information about products, crop, and markets to connect businesses of the two countries to cooperate, import, and export goods. However, according to experts, it is necessary to strengthen the control on compliance with environmental regulations, product standards, and many other regulations related to the quality of imported agricultural, aquatic, and seafood products to ensure safety for Vietnamese consumers.

According to the New Zealand Embassy, Vietnam imports various types of frozen fruits, vegetables, tubers, and aquatic products from New Zealand, such as bivalve scallops, squid, fish, paua, lobster, oyster, and tuna. To facilitate trade activities between businesses of the two countries, in 2020, the New Zealand Embassy, the MARD, and the Ministry of Finance signed an agreement on an electronic certification system for agricultural, forestry, aquatic, and food products of the two countries. It is a method of information exchange and online consensus between the two governments to facilitate customs clearance for agricultural, aquatic, and food products.

The exchange of electronic certification data helps to simplify the import and export process, speed up the customs clearance process, reduce costs, enhance reliability and transparency, and at the same time minimize the risk of fraud in the trade of goods. Currently, the Ministry of Primary Industries of New Zealand and the MARD of Vietnam have been completing the procedures for licensing the import of New Zealand strawberries and zucchini into Vietnam.