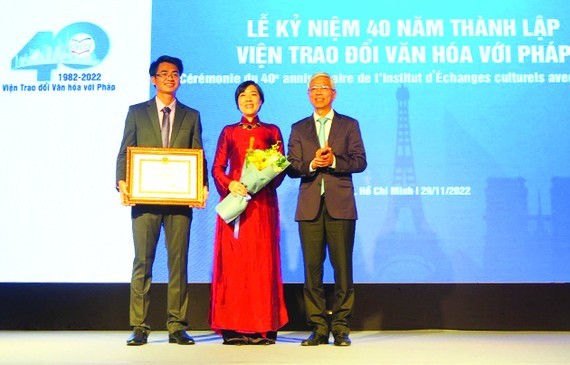 Vice Chairman of the municipal People’s Committee Vo Van Hoan (R) congratulates the Institute of Cultural Exchange with France (IDECAF) in HCMC on the occasion of its 40th founding anniversary.

As the country’s leading center of economy, finance, trade, science and technology, HCMC has made an important contribution to the Vietnam-France comprehensive strategic partnership. A lot of cooperation activities and cultural exchanges between HCMC and France have been organized in the city for many years in different forms of cultural and arts events, programs preserving and promoting heritages, and human resource training.

These activities have helped tighten the strategic partnership between the two countries and presented an image of HCMC as a young, dynamic and potential city to businesses and investors in France and French-speaking countries, he stressed.

Founded in 1982, IDECAF is under the management of the HCMC Department of Foreign Affairs. The institute has organized Franco-Vietnamese cooperation activities in the cultural, educational, scientific and technical fields, aimed at strengthening the ties of friendship and cooperation between Vietnam and France; established and develop cooperation in the cultural, educational, scientific and technical areas between Vietnam and all French-speaking countries as well as other countries; and contributed to meeting the public's demand for learning French and enjoying art in HCMC and southern provinces and cities.