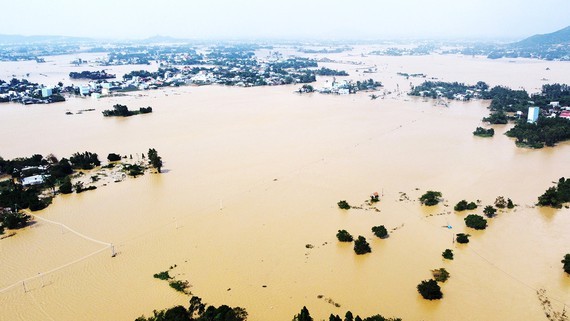 Tens of thousands of houses in the lower Kon River in Binh Dinh Province were flooded and isolated at noon on December 1. (Photo: SGGP)

By the afternoon of December 2, in the downstream areas along the Ba River in Phu Yen Province, the flood had gradually receded but still stayed at the alarming level of 2 to 3, and many residential areas remained inundated. In the downstream of Kon and Ha Thanh rivers in Binh Dinh Province, floods were retreating slowly, and people had not been able to repair the damage. Many people in the floodplains of Hung Nghia and Huynh Mai in Phuoc Nghia Commune in Tuy Phuoc District of Binh Dinh Province expressed concern because the recent terrible flood was partly caused by irrigation reservoirs and hydropower plants that discharged water, creating double floods.

A resident of the Ba River downstream area said that he did not know in what way the hydropower plant released water, but water came like a waterfall. Local people could not do anything in time and suffered heavy losses.

Similarly, in the recent flood, Khanh Hoa Province was also heavily flooded, with tens of thousands of houses, schools, and offices being submerged in water.

Nguyen An Phi, a resident in Vinh Thanh Commune in Nha Trang City of Khanh Hoa Province, said that it was the first time in the past few decades that his house was flooded like that. The water level was above his knees. The streets were about 2 meters under the water. “Only when many hydropower plants discharge floodwater at the same time can the water come so quickly," he said.

According to Mr. Toan, a part of the reason is that the ability to forecast natural disasters and heavy rain of the national hydro-meteorological agency is not accurate, making it very difficult for the locality to respond.

“Currently, the People's Committee of Phu Yen Province has directed the hydropower reservoirs to report and explain the operation of the recent flood discharge. In the coming time, the meeting of the provincial People's Council will petition and dissect the above issue," said Mr. Toan.

Water reservoirs must be upgraded, creating a flood prevention capacity

Referring to the issue of hydropower plants contributing to double floods, Mr. Tran Ly, General Director of Ba Ha River Hydropower Joint Stock Company, said that the plant’s water reservoir only has a small water storage capacity. It is the lowest terraced water reservoir in the upstream area of Ba Ha River.

On November 30, the unusually heavy rain made the water pressure on the reservoir too great. Moreover, Dak Srong and Krong H'ng hydropower plants together released floodwater, causing huge flood pressure on the downstream of the Ba River. Therefore, the Ba Ha River Hydropower Plant had to discharge water; otherwise, the water reservoir would be broken and extremely dangerous to the downstream area, Mr. Ly explained.

In Binh Dinh Province, Mr. Ho Dac Chuong, Deputy Director of the Department of Agriculture and Rural Development, said that the flooding of tens of thousands of households in the downstream of Ha Thanh and Kon rivers was caused by high rainfall in the upstream, instead of hydropower plants, that discharge water within the allowable limit.

Meanwhile, Mr. Nguyen Duy Quang, Deputy Director of the Department of Agriculture and Rural Development of Khanh Hoa Province, also said that the volume of water discharged by reservoirs was not too high. For instance, Am Chua or Suoi Dau reservoirs announced the flood discharge rate at 100 cubic meters per second but actually discharged at an average rate of 70 cubic meters per second. Therefore, the floodwater discharging of hydropower plants cannot be blamed for the flooding, but it is just one of many reasons.

Many irrigation experts say that hydropower investors often want to store as much water as possible so that there will be enough water to generate electricity in the dry season. When the rain is too heavy beyond the forecast, they simultaneously discharge water to keep their reservoirs safe.