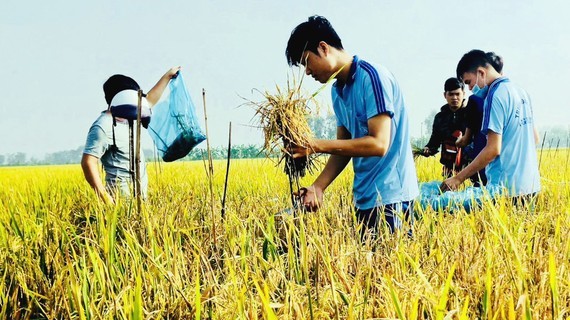 According to Ms. Nguyen Thi Thanh An, Chief Representative of the Australian Center for International Agricultural Research (ACIAR) in Vietnam, from 1993 to now, ACIAR has invested in 243 research projects in Vietnam, worth AUD157.5 million. ACIAR has supported many research institutes so that more than 120 Vietnamese scientists can participate in postgraduate training programs in Australia and leadership enhancement programs through ACIAR scholarships.

Over the next five years, ACIAR commits a budget of AUD23 million to agricultural projects in Vietnam with a focus on long-term research aiming the contribution to the transformation of the food and food system.

In October, the Mekong Delta Province of Dong Thap kicked off the project ‘Australia - Vietnam cooperation on sustainable rice value chains in the Mekong Delta' with a total budget of more than AUD5 million to raise awareness of 1.5 million farmers. This is an investment project in the form of public-private partnership, implemented by CIAR and SunRice Group in collaboration with An Giang University under the Vietnam National University-Ho Chi Minh City, the Can Tho University, and the Mekong Delta Rice Research Institute in three provinces including An Giang and Kien Giang and Dong Thap.

The project will be implemented from now to 2025, focusing on establishing an advanced center for milling and post-harvest processing plant in Dong Thap Province’s Lap Vo District as well as setting up a rice quality control faculty. Simultaneously, the project will take farmers, agricultural extension officers and researchers to advanced centers to improve their professional qualifications.

Assoc. Prof. Vo Van Thang, Principal of An Giang University, said that the Mekong Delta is the largest agricultural production center in Vietnam producing more than 50 percent of the country's rice output and 70 percent of various kinds of fruits. The region makes up 95 percent of the nation's rice exports. Therefore, when conducting projects, the school sets a dual goal of improving the quality of human resource training, carrying out applied research and helping farmers improve their professional knowledge in agricultural production.

Along with that, An Giang University will coordinate to build of research centers to support the access and application of high technologies in the production and operation of modern agriculture. In addition, the university strengthens academic-industrial cooperation between academic facilities and technology applications especially with Korean enterprises to make sure that research results are widely applied in reality.

A representative of Can Tho University said that through the projects, human resources in the agricultural field of An Giang University, Can Tho University in particular and the Mekong Delta region, in general, will be improved in terms of quantity and quality. This will pave the way for the process of development and innovation with an orientation towards high-tech and sustainable agriculture to meet the development requirements of the country.