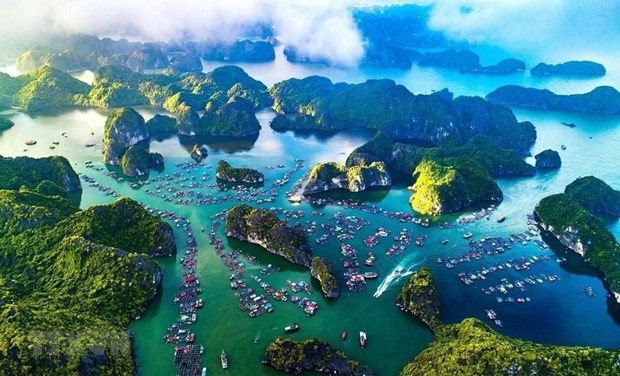 A view of Ha Long Bay in Quang Ninh from above. (Photo: VNA)

Vietnam is a coastal state with a sea area three times that of land, including more than 3,000 islands and two offshore archipelagos - Hoang Sa and Truong Sa. The country boasts a coastline of 3,260 km, with 1 km of coastline for every 100 km2 of land.

The population of coastal localities accounts for more than 50 percent of the country's, with most of the laborers work in sea-related occupations. The contribution of 28 coastal provinces and cities to the nation’s GDP has exceeded 60 percent.

Vietnam's sea is considered as one of the 10 richest centres of marine biodiversity in the world. The waters and islands in the country are home to 12,000 species of organisms living in more than 20 typical ecosystem types, belonging to six marine biodiversity regions.

There are about 35 types of minerals with different reserves in waters of the country, belonging to the groups of fuel, metal, construction material, precious stone and liquid mineral.

Large reserves of oil and gas are distributed in sedimentary basins on the continental shelf and in Hoang Sa and Truong Sa archipelagos.

According to a report themed “Vietnam’s blue economy: Opportunities and challenges" published recently by the Vietnam Administration of Seas and Islands (VASI) under the Ministry of Natural Resources and Environment, maritime economic activities can be divided into those at sea, and those not be implemented at sea but directly related to marine exploitation.

Vietnam has strengthened investment for long-term and sustainable oil and gas industry development.

Large sea areas hold potential for developing offshore wind power, which is expected to significantly contribute to the country’s socio-economic development; and the implementation of the Paris Agreement on climate change and Vientam’s commitment to net zero emissions by 2050.

With more than 120 beaches across the country, including 20 meeting international standards, Vietnam has also a great potential for tourism development.

Sea tourism plays a key role, accounting for about two-thirds of the industry's share. Tourism resources along the coast of Vietnam serve as a foundation for developing various types of tourism such as sightseeing, entertainment, eco-tourism, resort, sports and culture.

To move towards a blue sea economy, experts said Vietnam needs to pay special attention to conserving biodiversity, protecting the environment and expanding ecosystem services to enrich the potential for economic activities.