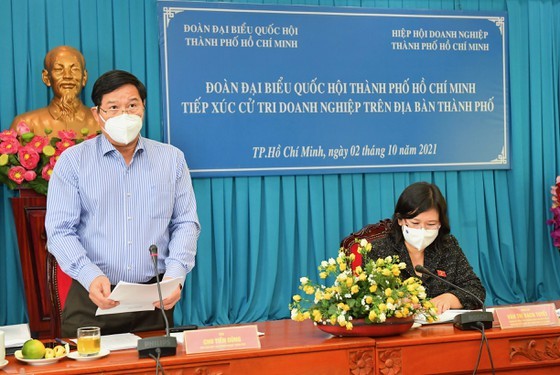 Mr. Chu Tien Dung, Chairman of the Ho Chi Minh City Union of Business Associations, speaks at the meeting with the delegation of the HCMC's National Assembly deputies. (Photo: SGGP)

Production amid difficulties during the pandemic

At the meeting with voters, Mr. Chu Tien Dung, Chairman of the HUBA, said that businesses had just gone through an extremely tough time, but they had tried their best to join hands with the city to fight the pandemic, restore, and develop the economy.

Many enterprises have overcome difficulties and continued to maintain production under the models of "three-on-site" and "one route, two destinations", which are very expensive and unprofitable, but help to provide enough necessities, food, foodstuffs, and essential consumer goods to people, and at the same time, prevent the domestic and global supply chains from breaking.

According to HUBA’s Chairman, during the fourth outbreak of the Covid-19 pandemic, businesses in most industries and sectors in HCMC were paralyzed and had to close or halted operations. During this outbreak, only about 20 percent of production capacity can be maintained under the model of "three-on-site" and "one route, two destinations". However, maintaining production at high costs and heavy losses cannot prolong, and the domestic and foreign supply chains are seriously disrupted.

Mr. Chu Tien Dung acknowledged that poor business results had made the number of businesses that dissolved, closed, and temporarily suspended much higher than the number of newly-established ones. Most enterprises that dissolved or ceased operations are small and super-small-sized ones operating in the fields of transport, tourism, or not in the essential industries as prescribed.

At the meeting, the Chairman of the HUBA expected that the thoughts, aspirations, and proposals of enterprises would be recorded for consideration and resolving, to create new motivation to help businesses continue to develop and contribute to the rapid and sustainable recovery of the economy.

According to statistics, 24,000 enterprises had left the market in HCMC by August this year, accounting for 28.1 percent and increasing by 6.6 percent over the same period. However, the actual number is much higher because a large number of enterprises have not declared.

“The pressure on the city's social welfare work increases as laborers face difficulties due to job loss and no income. The number of workers who have to leave the city to return to their hometowns is increasing. Some workers do not want to return to the city for work. It is a big difficulty when enterprises resume production, which may seriously affect the economic recovery speed of the city in the near future," said Mr. Chu Tien Dung.

Mr. Pham Van Viet, Vice Chairman of the HCMC Association of Garments, Textiles, Embroidery, and Knitting, said that HCMC had a total of more than 4.7 million workers. Of which, over 3.2 million were in the production and business sectors, and more than 50 percent of them were workers from other provinces. Over the past time, HCMC has cooperated with localities to bring over 33,000 people back to their hometowns, not to mention those who had returned to their hometowns on their own earlier and had not been counted yet.

Many workers want to return to HCMC to work but have not been able to return due to the requirements of pandemic prevention and control and strict travel regulations between localities.

According to Mr. Pham Van Viet, enterprises that are already weak will reduce their productivity, and there will be a risk of supply chain disruption due to labor shortage. Enterprises need practical support policies and guidelines, such as organizing bus trips to bring workers from localities to HCMC, setting up "buffer zones" for screening examination, providing temporary accommodation for workers from other provinces within 14 days in vacant resettlement apartment buildings and schools, where students have not returned, and vaccinating and testing workers before enterprises welcome them back to the factory. 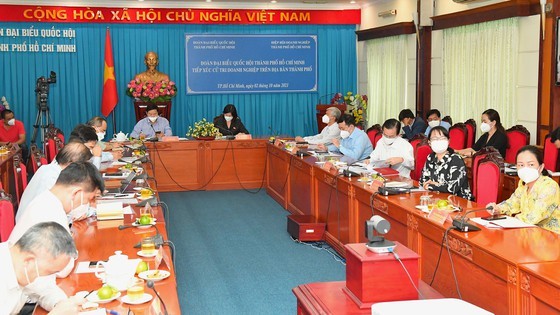 The scene of the meeting of the delegation of the HCMC's National Assembly deputies with HCMC-based business voters. (Photo: SGGP)
Mr. Pham Van Viet also suggested that HCMC should have land funds in districts to build concentrated worker accommodation areas. The city should have policies of subsidizing housing and boarding houses and stabilizing house rents for workers. HCMC also needs to call for investment and offers preferential interest rates to encourage and attract businesses to participate in the development of social housing and concentrated accommodation for workers. The situation that workers in HCMC returned to their hometowns due to the impact of the Covid-19 pandemic has seriously affected the production of enterprises. Therefore, the HUBA suggested that the Government, HCMC, and provinces need solutions to create favorable conditions for workers to return to work when the pandemic is under control.Businesses exhausted According to Mr. Chu Tien Dung, the resources of enterprises have been exhausted, and they no longer have enough capital to restore production quickly. The HUBA also proposed the Government to consider policies to support and remove difficulties for businesses in the context of the Covid-19 pandemic. Mr. Pham Van Viet assessed that in the context of the impact of the Covid-19 pandemic, cash flow is like oxygen to businesses. However, most of them cannot access support packages because of strict regulations in the Law on Credit Institutions. In which, enterprises must ensure no bad debt and have revenue, profit, and collateral to be disbursed. “The pandemic has caused revenue of businesses to decline. Businesses have no profits and no collateral. It is forecasted to take more than two years to restore operations while the lending conditions of commercial banks remain unchanged,” said Mr. Pham Van Viet. He suggested that there should be a special regulation so that all businesses can enjoy preferential interest rates, regardless of industry. He also added that although it was expected that in October this year, the State Bank of Vietnam and the Ministry of Finance would submit to the National Assembly a support package of about VND3 trillion with an interest rate of 4 percent per annum on a total outstanding loan of VND100 trillion, businesses would still be unable access it if the Government does not issue a special mechanism for those encountering difficulties due to the pandemic. Mr. Nguyen Quoc Ky, Chairman of the Board of Directors of VIETRAVEL Company, also emphasized that businesses need financial support like a patient needs oxygen. He suggested switching awareness from “Zero Covid” to “with Covid” to quick and decisive action. If the city stays half-hearted and sticks to the idea of Zero Covid, it will slow down the progress of socio-economic recovery when reopening and continue to negatively affect people's lives and welfare. According to Mr. Nguyen Quoc Ky, in the fight against the pandemic and economic recovery, businesses and entrepreneurs need to be considered as partners instead of objects. If placed in the right position and trusted, entrepreneurs will be excited to accompany and contribute effectively. The HUBA proposed the SBV to increase refinancing loans, continue to flexibly expand credit growth limits for credit institutions to have more resources to lower interest rates and provide credit for economic recovery, support businesses to access new loans with low-interest rates without having to mortgage assets for them to restore production.
By staff writers – Translated by Bao Nghi