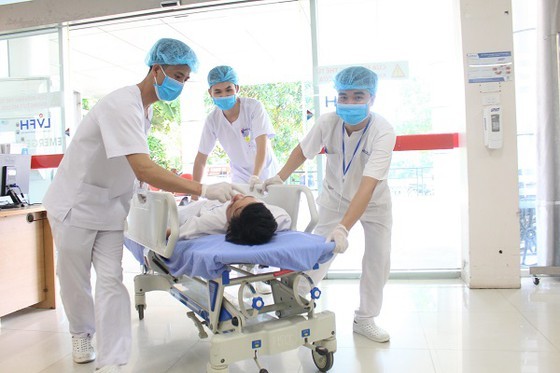 The situation has been affecting a large number of patients, with some even buying their own from outside sources.

After three days in the emergency room for a femoral neck fracture, Nguyen Thi Minh’s mother was scheduled for hip replacement surgery.

However, the operation was postponed due to insufficient medical supplies.

Minh said: “I thought that my mum would soon have the surgery so that she can quickly recover.

“However, the doctors told us that it was postponed, as the hospital has just performed several emergency operations, which led to a shortage of medical supplies.

“We were told that the new schedule would be announced as soon as possible.”

Meanwhile, other patients had to buy medicine and surgical instruments from outside sources.

Linh, a Hanoi resident, had to go out herself to buy hypodermic needles and catheters for her relative who was undergoing surgery.

Linh said: "It was not a large amount, but the supply shortage is making us miserable.

"It was only just before the day of the surgery, and I was still rushing to buy the catheters."

Another hospital manager in Hanoi who asked not to be named said: “Lacking medical supplies after emergency cases, we constantly need to apologize to patients for postponing their surgeries.”

“In many cases, we have to advise them about the choices they have - either wait so that they can be covered with medical insurance, or agree to buy supplies from external sources, or they can choose to go to other medical facilities.”

According to Doctor Tran Van Phuc from Saint Paul General Hospital, the current shortage of medical supplies and medicine was due to delays in bidding and procurement.

He said: “In the current legal context instruction circulars have not yet covered all the possible situations, and arrests for bidding violations have caused unease among the procurement staff.

“It is obvious that the violators must take responsibility for their actions, but it is also necessary to improve the legal framework so that the current staff have guarantees in their work.

“Health policy makers need to take into consideration the majority of the patients.”

One of the problems is the costs in the bidding plan, which is the reason for the shortage of medical supplies and the unrepairable equipment.

According to Provision 01/2012/TTLT-BYT-BTC, units responsible for the pricing in the plan have to refer to the winning bid prices within the previous 12 months, as updated by the Ministry of Health.

Hospitals would then decide on the lowest price point. However, in reality, pricing from the sources for materials, storage, transportation and distribution can increase, and therefore these medical facilities cannot procure supplies at the planned prices.

Dr. Nguyen Huy Quang, former head of the health ministry’s department of legal affairs, said: “The major issue that the health sector is struggling with right now is that the staff can easily become violators, especially in procuring medical equipment.”

Many medical facilities are not aware of the legal frameworks. Therefore, it is necessary to have official instruction documents to specify the laws on public property, public investment, and bidding.

Quang added that there should be a separate regulation for the health sector, as it directly concerns people’s health.

“This will help the sector have a transparent legal framework that could regulate any related issues," he said.

“It will also create an institution to manage and protect bidding participants, otherwise they would be very confused and perplexed.”

Discussing this topic in a recent meeting on amending the Law on Medical Examination and Treatment, Dr. Nguyen Anh Tri said that the procurement of medical supplies, biologicals and medicine is seeing a major disruption, which greatly affected the patients and the people.

Dr. Tri also recommends prioritizing legal amendments, including the Law on Medical Examination and Treatment, Law on Health Insurance, and Law on Prevention and Control of Infectious Diseases, as well as the relevant decrees and laws, such as the laws on price, procurement, and public property.

“A comprehensive and suitable legal framework is needed for medical workers to follow,” he said.