Projects to build new hospitals still on paper due to bottlenecks 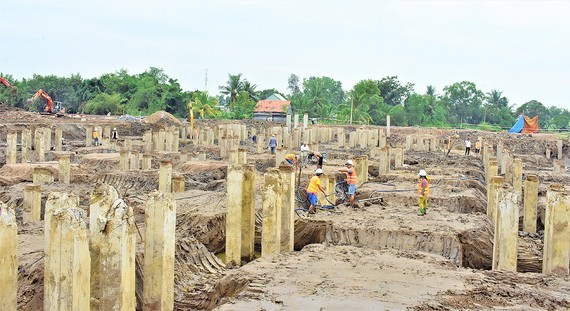 79-year-old Truong Thi Le is encouraging her children to dismantle buildings and housing architectural materials in the Dem market in Binh Chanh outlying district where several hospital projects of Ho Chi Minh City and the government were implemented to hand over the premises to the local authority as per the family’s promise. Old woman Le said that the family has 2,900 square meters in the area of clearance to make way for the city to build the Ho Chi Minh City Central Endocrinology Hospital. When the local government announced the relocation plan, family members were worried but they are not now anxious because they will receive a compensation of VND3 million-VND3.2 million per square meter for land for perennial crops and two land lots in the Vinh Loc B resettlement area.

Talking about the project of Ho Chi Minh City Central Hospital for Endocrinology, Head of the Compensation and Site Clearance Committee of Binh Chanh District To Dai Phong said that the project has a total area of nearly 30,000 square meters including 5 blocks with a total investment of VND1,000 billion taken from government bonds. The compensation and clearance work for the project at first faced many difficulties, but so far, 25/27 households have agreed to receive compensation and handed over the site to the local government; meanwhile, the remaining two households in the district will be forced to leave if the family did not hand over the premises as commitment.

According to Mr. To Dai Phong, in addition to the project of Ho Chi Minh City Central Hospital for Endocrinology and the Center for Forensic Psychiatry in Binh Chanh District, the city will also construct the second facility of Cho Ray Hospital in Le Minh Xuan Commune. The local administration has made great efforts in compensation and site clearance and has handed over to the investor for construction. As planned, the project was started in 2018 and inaugurated in 2020, but currently, the second facility of Cho Ray Hospital project is still a vacant land lot fenced with corrugated iron.

Moreover, the 1,000-bed second branch of the Oncology Hospital in Thu Duc City was inaugurated in October 2020 with a total investment of VND5,800 billion. More than two years from the date of inauguration to date, equipment and machinery have not been handed over to the second facility. Dr. Diep Bao Tuan, Deputy Director of Ho Chi Minh City Oncology Hospital moaned due to an incomplete facility, the hospital can only admit 600-700 inpatients a day while the hospital receives 1,200-1,300 patients a day. Sixteen modern operation rooms cannot be used, as a result, all surgeries have been performed in the first facility. As a result, thousands of cancer patients have been waiting for surgery.

The Trung Vuong Hospital in District 10 was established in 1963, after a long time of use, many buildings and items are old and degraded, failing to provide examination and treatment services. After the hospital sent its proposal to competent agencies, the hospital started to build a new area on an area of 4,700 square meters with a total investment of VND313 billion for service provision of emergency, resuscitation, surgery, testing, and diagnostic imaging in November 2021.

The construction time is expected to be 16 months, but the construction is falling behind schedule, so doctors and nurses are still working in narrow and humid rooms.

Falling in the same fate, the renovation and upgrading projects of the Ho Chi Minh City Dental-Jaw-Facial Hospital and the outpatient department of the Children's Hospital 2 are in the middle of construction. Patients must share their beds.

According to the Department of Health of Ho Chi Minh City, the health sector has been investing to meet the construction target, striving to become one of the nine high-quality service industries of the city as per the development planning of the city's health sector to 2020 with a vision to 2025 approved by the municipal People's Committee. In the mid-term period 2016-2020, the sector has implemented 88 health projects with a total investment of VND34,245 billion. Amongst them, 26 construction projects have been put into use from 2016-2022 with an investment of over VND14,300 billion and 22 professional equipment worth VND1,290 billion.

In many recent meetings on socio-economic development, leaders of Ho Chi Minh City always requested to disburse of public investment capital with a focus on site clearance for a faster acceleration of the progress of infrastructure and construction projects including medical projects.