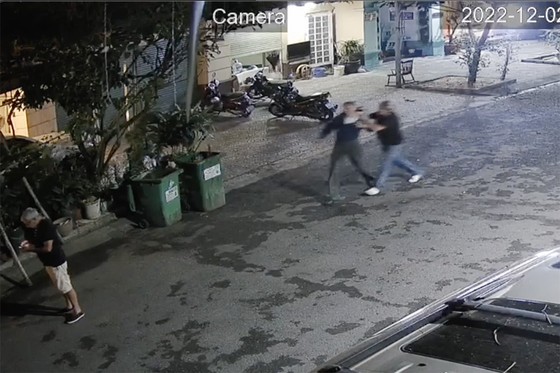 The incident is recorded by security cameras. (Photo: SGGP)

According to Hung's report, around 11:35 p.m. on December 2, he was on guard duty in front of the gate of the house at No.216/28 Nguyen Van Huong Street in Thao Dien Ward, Thu Duc City, when a car came.

Two foreign men got out of the car, showing signs of being drunk. One of them requested to enter the mentioned-above house to find his friend. Hung explained that that was a private house, and no one in the house was his friend. However, one of the two men shouted and cursed.

“I kept a distance of 30-40m from him for safety and showed him the house he looks for. I tried my best to help, but he still insisted on entering the house I was on guard duty and came towards me," Hung wrote in his report.

"He attacked me with his left hand to my chest, and at the same time, he yanked on my shirt and broke many buttons. He also hit the back of my neck with his right hand. I was shocked and dizzy and barely stand. Then, he gripped my neck and dragged me to the guard house of the building I was on duty - where there is no camera. He strangled me and hit me 2-3 more times on the back of my neck.”

A few minutes later, when Hua Ha Phuong, a neighbor, discovered the incident and intervened, the foreign man stopped attacking Hung. Not until the owner of the house where Hung worked also showed up to clearly state that it was his house, and there was no stranger, did the foreign man go to the house next door. 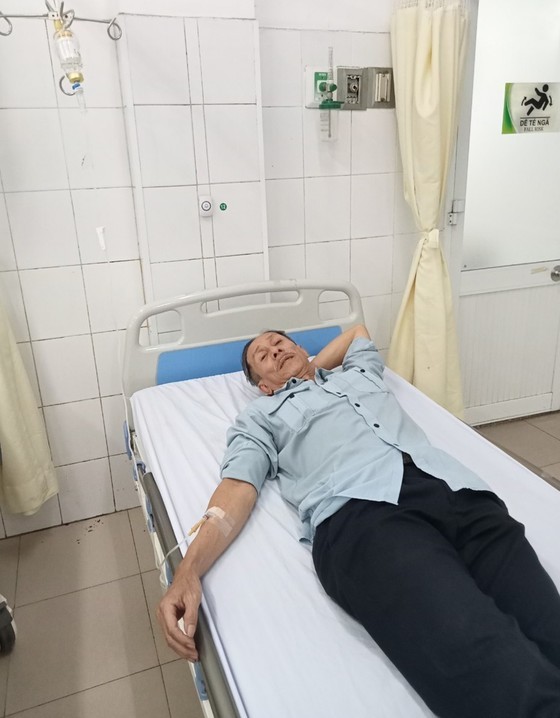 Hung, the security guard, is treated at the hospital. (Photo: SGGP)
Even when the ward police were present, the foreign man still shouted aloud. Faced with the above situation, the ward police brought the foreign man to the headquarter and invited relevant people to come to solve the problem. The whole incident was recorded by security cameras. Because the case relates to foreigners, the ward police have reported it to their superiors for handling according to regulations.
By Chi Thach – Translated by Gia Bao