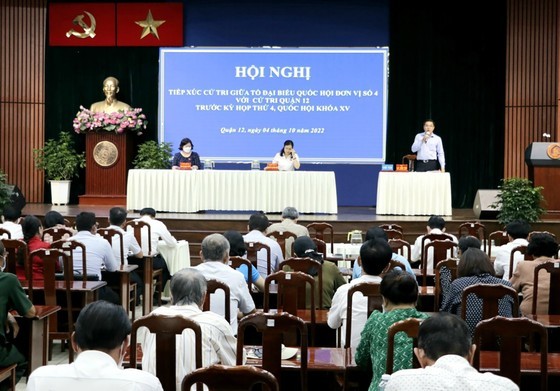 At the meeting (Photo: SGGP)
On the afternoon of October 4, delegates of the National Assembly of Ho Chi Minh City included Ms. Van Thi Bach Tuyet, Deputy Head of the HCMC National Assembly deputies delegation; Nguyen Thi Hong Hanh, Deputy Director of Ho Chi Minh City Department of Justice, meets voters in District 12, before the fourth session of the fifth National Assembly.
During the meeting, voters in District 12 voiced their concerns of many issues related to social housing for low-income people, medical staff’s quitting job; deterioration of several roads, violence against children, school violence and sluggish public investment projects.
Voter Nguyen Van Nhon in Thanh Loc ward complained that the Ha Huy Giap route connecting Ho Chi Minh City with the Southern Province of Binh Duong is often congested and traffic accidents occur meanwhile, the Ha Huy Giap parallel road project has existed for a long time but has not been implemented until now. Voters suggested early consideration of investment and construction of this project.
Furthermore, voters suggested that while waiting for the project investment, local authorities and related agencies need to strengthen patrols and regulations to ensure traffic safety.
According to voter Nguyen Van Muoi, Tan Chanh Hiep ward, currently the shortage of social housing for workers and low-income workers is severe in most of the big cities across the country; partly due to the implementation of administrative procedures to invest in projects and buy houses; on the other hand, it is due to complicated administrative procedures. 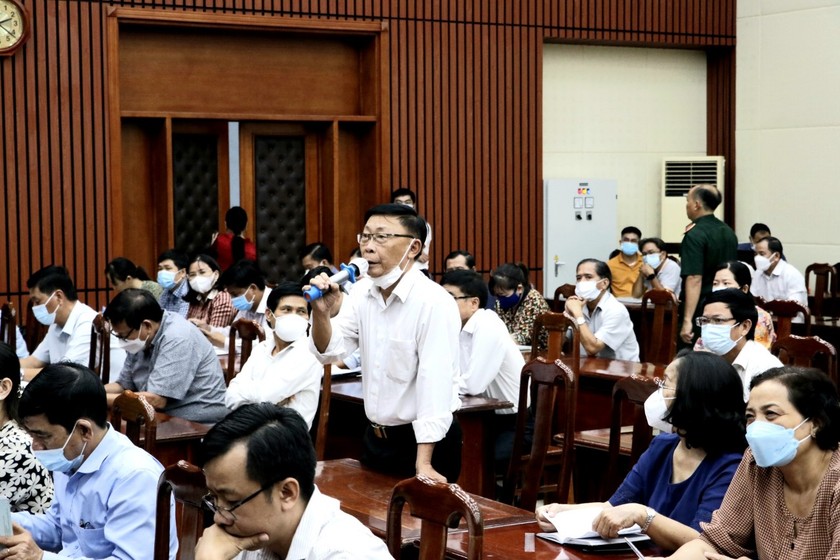 Voters raise their concern of social housing projects for low-income earners (Photo: SGGP)
Therefore, voters suggested that unnecessary and cumbersome administrative procedures should be eliminated in order to create favorable conditions for businesses and people to access social housing projects. Afterwards, localities must take measures to manage and closely monitor transactions to curb speculation.
Responding to voters' petitions, Mr. Nguyen Van Duc, Chairman of District 12 People's Committee, confirmed that some roads such as Ha Huy Giap and the National Highway 1A running through the district are degraded and overloaded. The district administration is studying a road parallel with Ha Huy Giap street which costs a big money whereas the city's funding is limited, so the project has not yet been invested.
Listening carefully to recommendations of voters, Ms. Van Thi Bach Tuyet said that the Ho Chi Minh City National Assembly Delegation will make recommendations to the municipal People's Committee on issues under the city's authority such as investment in upgrading the National Highway 1A.
The National Assembly Delegation will also propose to the People's Committee of Ho Chi Minh City to have policies to pay attention to and speed up the progress of social housing projects and houses for low-income people in the city.
At the same time, it will propose to the National Assembly and the Government to have policies to encourage investors and businesses to participate in social housing investment to have an affordable housing fund to serve workers and income earners.