The  Laboratory  of Urban Science Research in Ho Chi Minh City co-established by the Architecture Research Center under the Department of Planning and Architecture and the Massachusetts Institute of Technology (MIT) in the United States. 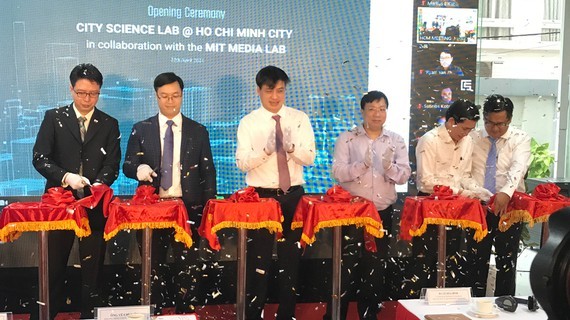 At the ribbon -cutting ceremony  (Photo: SGGP)
The Urban Science Research Laboratory is responsible for carrying out research and providing consultations to the Department of Planning and Architecture in architectural management, urban landscape, and urban design. In addition, the department also has to research and apply domestic and foreign scientific and technological advances to urban architecture research and management.
As part of this collaboration, the Media Lab under MIT and the Architecture Research Center have established and operated the Ho Chi Minh City Urban Science Research Laboratory with the aim of learning and building an analytical model and predict a series of urban development in HCMC.
The Architecture Research Center will also cooperate with scientists from the Institute of Smart City and Management under the University of Economics in HCMC, the multimedia laboratory of the University of Information Technology, VLab Joint Stock Company, and Sunny World Development & Management Corporation to do research.
The research goal of CityScope platform developed by MIT aims to simulate and research urban development in Ho Chi Minh City. The platform uses physical models in combination with algorithms, computer vision technology, and urban data to create models that allow users to interact and alter elements in the model to identify the urban's socio-economic - physical interactions in different development scenarios.
In Vietnam, this model has been applied in the study of Red River water management at the University of Water Resources. HCMC's leaders took heed of the model which was introduced at the seminar "Vision for an innovative district in Ho Chi Minh City" in 2018.
Speaking at the inauguration ceremony, Vice Chairman Le Hoa Binh emphasized MIT’s decision to open its first Urban Science Study of the Urban Science Network in Southeast Asia proves the southern metropolis’ attractiveness as MIT is one of the top 5 universities in the world, and the leader in engineering and technology.
According to Mr. Le Hoa Binh, authorities in HCMC realized that pressure on urban areas of the city, both existing areas and new urban development areas, is increasing. Meanwhile, urban planners of the city have been applying the traditional management, analysis and assessment tools which have not met the speed of development as well as the diversity and complexity of the factors affecting urban planning.
That’s why the People's Committee of Ho Chi Minh City has introduced breakthrough policies in the field of urban development and management such as the city development project to become a smart city, development of a highly interactive innovative urban area in the East of the city or Thu Duc City now.
To facilitate carrying out research of the city’s new research laboratory, Mr. Binh proposed the Department of Planning and Architecture to assist the Architecture Research Center during the process.