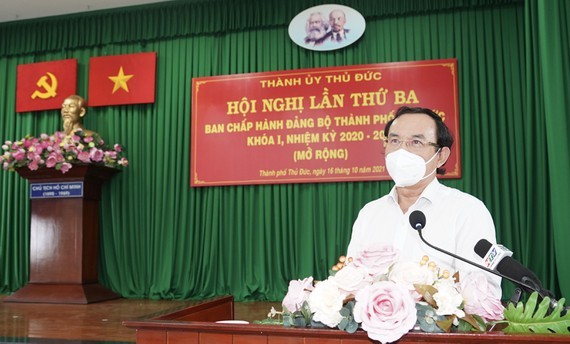 Secretary of the HCMC Party Committee Nguyen Van Nen speaks  at the third session of the first term Thu Duc City Party Executive Committee of the 2020-2025 tenure. (Photo: SGGP)
As of present, Thu Duc has brought the pandemic under control. The city needs to assess every individuals and organizations that play roles in the fight against Covid-19 to identity their responsibility and negligence in the prevention and control of pandemic, the City Party Chief asked.

The city received much support and sharing from people. Therefore, the city has to pay tribute to supporters from now until the lunar New Year 2022, especially caring for old people living alone and orphaned children by Covid-19.
Regarding to the increasing demand for social housing, the local authorities must define urban planning and identify residential areas, and ask landlords to ensure fire and pandemic safety measures when building renting houses, Mr. Nen stressed.
He also reviewed main missions in the city’s economic recovery and growth and hoped that the city will continue to enhance the unity and solidarity in implementing the key tasks to achieve well deserved results. 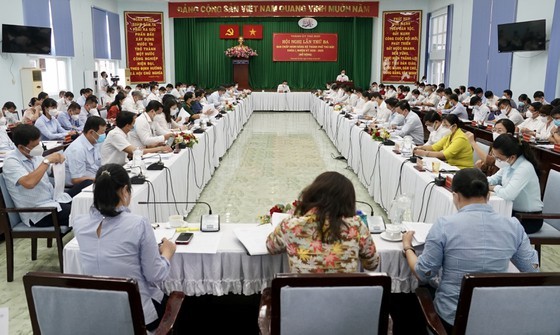 At the meeting
According to Secretary of the Party Committee of Thu Duc City Nguyen Van Hieu, the city has hi-tech industrial parks, industrial and export processing zones featuring a large number of workers with a huge demand for housing. He also expressed his concern about the city’s substandard rental housing, causing difficulties in preventing the spread of Covid-19.
Speaking at the meeting, Chairman of the People’s Committee of Thu Duc city said that Thu Duc recorded 5,600 cases that need to own or rent a social home. Thu Duc has built social housing development plan in the 2021-2025 period, with a vision to 2030. The city has currently 20 projects, including six ones completed land clearance compensation.
Besides, the city plans to develop housing for nearly 80,000 workers at three locations in the high-tech park.
He also proposed HCMC to approve Thu Duc’s pilot plans on implementation of breakthrough programs and establishment of four functional centers promoting the city’s development, and issue a decision on granting power and assigning human resource to the locality in the fields of budget, investment, land and urban management. 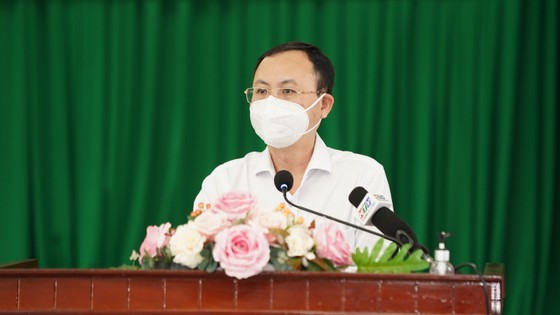