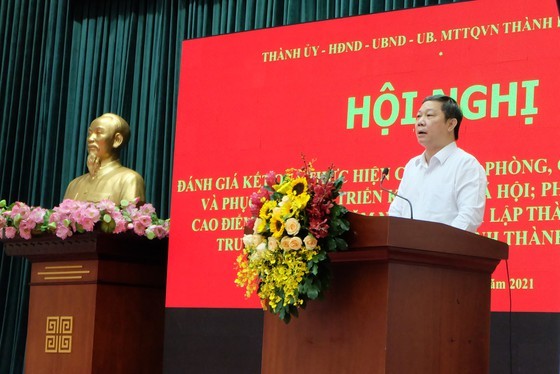 Vice chairman of the People’s Committee of HCMC Duong Anh Duc speaks at the meeting. (Photo: SGGP)
The functional departments, units and organizations of the new city can submit their works to the website http://thuduc-congtrinhthidua.hmgis.vn/ before October 30.

In addition, the city has also carried out tasks under the resolution No. 1111/NQ-UBTVQH14 on arranging administrative units at district and commune levels in the 2019-2021 period and building Thu Duc into a smart, creative, civilized and modern city with sentimental attachment and sustainable development.
In which, the city has to maintain its achievements in preventing and controlling the pandemic and focus on social welfare activities.
Speaking at the conference on reviewing the implementation of the pandemic prevention and control and socioeconomic recovery and launching the emulation movement on October 23, Vice chairman of the People’s Committee of HCMC Duong Anh Duc highly appreciated Thu Duc’s efforts and creativity in the pandemic prevention and control works.
He hoped the new city will promptly resume production and business activities, and try to donate one-third of the city’s economy and contribute 7 percent of the country's GDP as planned. 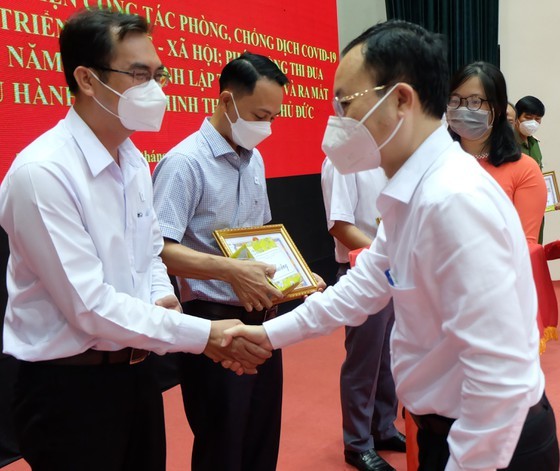 Secretary of the Party Committee of Thu Duc City Nguyen Van Hieu (R) congratulates awardees.
On this occasion, Chairman of the People’s Committee of Thu Duc City Hoang Tung presented certificates merit to 64 organizations for their outstanding contribution in the city’s Covid-19 fight.
Speaking at the meeting, Chairman of the People’s Council of Thu Duc City Nguyen Phuoc Hung said that the city has basically brought pandemic under control. The first dose vaccination rate reached nearly 99.9 percent while the second dose rate was 97.47 percent of the total population aged 18 and over.
Besides HCMC’s Covid-19 support packages that have been delivered to people affected by pandemic in three phases, Thu Duc also actively offered nearly 280,000 welfare bags, 12,252 tons of rice and foods worth VND81 billion to needy people, and presented urgent aid to 431 mothers who are breeding infants under 12 months of age with a fund of VND940 million. 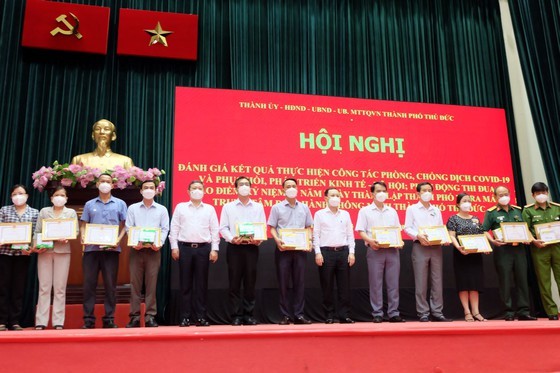 Thu Duc City's leaders present certificates merit to 64 organizations for their outstanding contribution in the city’s Covid-19 fight.
As of now, 469 shopping malls, supermarkets, convenient stress; five traditional markets, and 246 business in industrial parks and export processing zones, high tech park have resume their operation.
Thu Duc City was officially formed on December 31, 2020 by merging three eastern districts of 2, 9 and Thu Duc.
The establishment of Thu Duc City is a very important special event. The first city using the city-within-city model in the country will help HCMC’s eastern region to become a core in the economic development of the southern hub and the Southern Key Economic Region, contributing in establishing the added-value chain in the technology platform, technical infrastructure and modern society in accordance with international standards and giving financial support to businesses to grow.
It is a united urban and administrative space connecting essential factors of the highly interactive innovative urban area meeting the demand on technology innovation, creativity and startup. 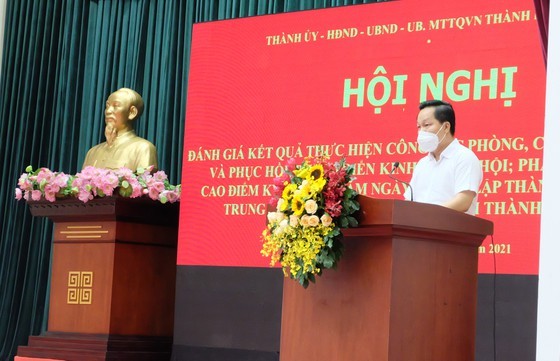 Thu Duc City emulation movement the first anniversary of its establishment Resolution No.131 resolution No. 1111/