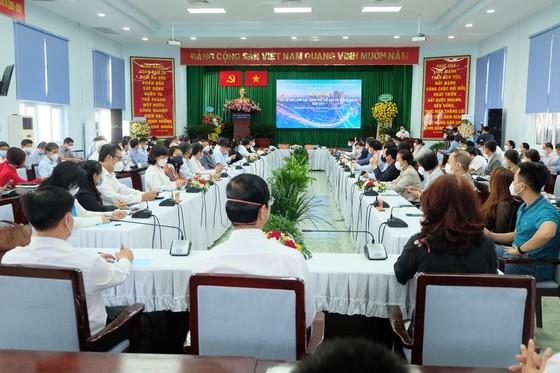 At the meeting (Photo: SGGP)
He was speaking at a meeting between businesses in Thu Duc City and leaders of the Party Committee, the People's Council, the People's Committee, and the Vietnam Fatherland Front Committee of Thu Duc City on November 6.
At the meeting, Chairman of Saigon 3 Text tile and Garment Company Pham Xuan Hong, respectfully acknowledged Thu Duc government’s commitment to full coverage of Covid-19 vaccine for workers. Moreover, Thu Duc administration has collected and treated workers infected with Covid-19 so as not to break the production chain.
According to Chairman Hong, in order for businesses to resume production well, the Thu Duc government should pay more attention to policies to support workers, especially unemployed ones. Along with that, Thu Duc should closely follow the state's support packages to make a proposal for businesses in Thu Duc city.
Managing two companies with more than 1,000 employees, General Director of Dai Truong Hai Security Service Company Le Quoc Hoi said that the company’s biggest present difficulty is a labor shortage.
According to Mr. Hoi, in the past time, laborers have flocked back to their hometowns. So far, only about half of them have returned to the southern metropolis, leading to a shortage of laborers. Therefore, Mr. Hoi suggested that Thu Duc City should coordinate with provinces and establish channels to give workers returning to HCMC for work  support including vaccination, accommodation, and social security to help them ensure their lives in the city. At the same time, there should be a specific commitment to Covid-19 vaccination, support of hostels as well as social security during the first time they return to work.
Talking to leaders of Thu Duc City, Chairman of the Board of Directors of Nam Thai Son Import-Export Corporation Tran Viet Anh said that many old industrial parks in Thu Duc city still exist interspersed in residential areas. These are mainly low-tech businesses, surrounded by many shacks, an area with a very high risk of infection. 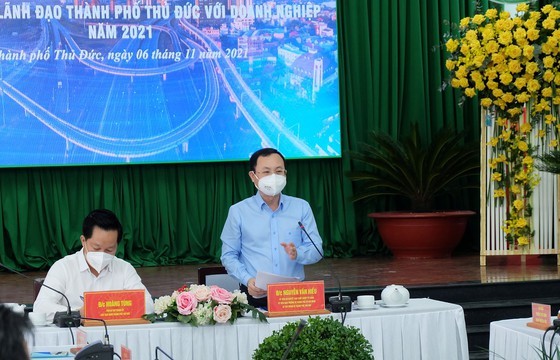 Secretary of the Thu Duc City Party Committee Nguyen Van Hieu  speaks at the meeting (Photo: SGGP)
Meanwhile, Thu Duc City has model production zones such as Saigon Hi-Tech Park that the city needs to orient towards. In the past time, the Hi-Tech Park has not generated many infected cases and is also convenient for carrying out production activities to meet the requirements of epidemic prevention and control in business establishments. In addition, he also suggested that Thu Duc City have a standard for worker accommodation for ensuring the environment and living conditions for workers.

The Secretary of the Thu Duc Party Committee affirmed that the city will provide maximum support for enterprises in production activities expecting that businesses take the initiative to have a safe production plan, regularly screen workers for diseases and promptly report to the authorities if Covid-19 infected cases are detected.
While talking with some entrepreneurs, Chairman of Thu Duc City People's Committee Hoang Tung disclosed that currently 22 Covid-19 vaccination points are set up in Thu Duc City; hence, residents wanting to receive Covid-19 vaccine jabs can go to these venues for a shot.
The Chairman also pledged to provide all medical services to minimize the risk of aggravation or death for people with Covid-19 in the area.
To help more than 41,000 businesses in the area during an economic recovery, one of the top tasks that Thu Duc City is orienting towards is administrative reform. In particular, Thu Duc City is committed to shortening the processing time of administrative procedures, adopting digital transformation as the city's most important activity. Thu Duc city leaders announced that from now until the end of the year, 50 percent of administrative procedures will be served at level 4.
On this occasion, Thu Duc City administrators gave flowers and expressed gratitude to businesses accompanying the city to fight the epidemic.