Speaking from the HCMC end at the regular online meeting of January 2021 of the Government on the morning of February 2, Mr. Vo Van Hoan reported to the Government on the socio-economic situation, activities to ensure a happy Lunar New Year, and the prevention of Covid-19 pandemic in the city.

As for socio-economic development, Mr. Vo Van Hoan assessed that the achieved targets showed that the economy of HCMC managed to maintain growth compared to the same period last year.

Specifically, in January this year, retail sales of goods increased by more than 12 percent, and export turnover surged by 16.4 percent. Exports of high-tech products, in particular, climbed sharply, with exports from the Saigon Hi-Tech Park jumping by more than 28 percent, reaching nearly US$1.5 billion. The index of industrial production in the city soared by 34.5 percent. In the first month of this year, HCMC had more than 3,300 enterprises resumed operation, up 19.5 percent. According to Mr. Vo Van Hoan, only the tourism, accommodation, and catering services saw decreases over the same period.

As for budget revenue, by January 31, the total budget revenue of HCMC was estimated at VND40 trillion, reaching 11 percent compared to the estimate. On average, every working day, the city collects about VND2 trillion, equal to 135 percent of the average receivables.

Mr. Vo Van Hoan informed that HCMC had spent an estimated VND813 billion on activities to taking care of underprivileged people and the people affected by the Covid-19 pandemic on the occasion of Lunar New Year. The city has also prepared a plentiful source of goods to ensure sufficient supply for the market and prevent prices from increasing suddenly. 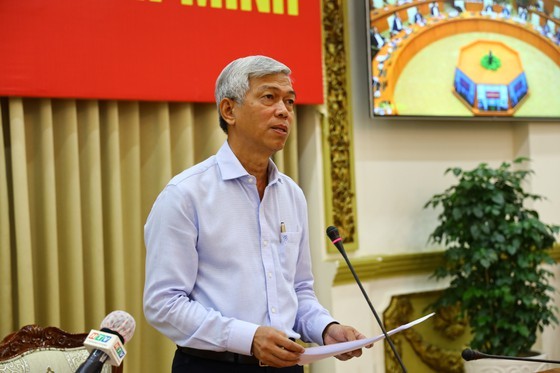 Mr. Vo Van Hoan, Vice Chairman of the People's Committee of Ho Chi Minh City, speaks at the online meeting. (Photo: HMC)
Regarding the Covid-19 pandemic situation in the city, Mr. Vo Van Hoan said that right after the Covid-19 cases in Hai Duong and Quang Ninh provinces, HCMC had traced and discovered one Covid-19 case, due to close contact with a patient in Hai Duong Province. It continued to trace F1, F2, and F3 cases, organize isolation and testing. Up to now, all F1 cases have given negative results.

Currently, HCMC is isolating 2,862 cases. The Vice Chairman of the municipal People's Committee affirmed that up to now, the city had not recorded any Covid-19 community transmission. It only faces a high risk of Covid-19 cases from outside, and it has been taking many measures to prevent this intrusion.

Regarding the key work in February this year, Mr. Hoan said that HCMC would continue to focus on carrying out measures to prevent Covid-19, organize, and take care of disadvantaged people in the Lunar New Year.

At the same time, the city would continue to synchronously implement the theme of 2021 – ‘Year of building an urban administration and improving the investment environment’; focus on arranging district and commune-level administrative units and establishing Thu Duc City. He said that Thu Duc City had operated normally after changing the organizational model, with all matters related to the people being ensured against congestion and difficulties.

The appointment is based on keeping the same positions of leaders of the Party Committees, the Party Offices of District 2, District 9, and the former Thu Duc District.

For the above agencies to come into operation soon, Mr. Nguyen Phuoc Hung, Standing Deputy Secretary of the City Party Committee, Chairman of the Thu Duc City People's Council, asked the heads of the City Party committees and the Office of the City Party Committee to quickly stabilize the organizational structure and focus on deploying political duties. Along with that, they should promote setting the working regulations and assignment of tasks clearly, avoiding overlaps, affecting the operational efficiency of the unit.

He also expected that the assisting agencies of the Thu Duc City Party Committee would unite, unify, and coordinate to perform the tasks. In the short term, they should do well the activities of taking care of underprivileged people during Tet holidays, and organize well major holidays in the city.