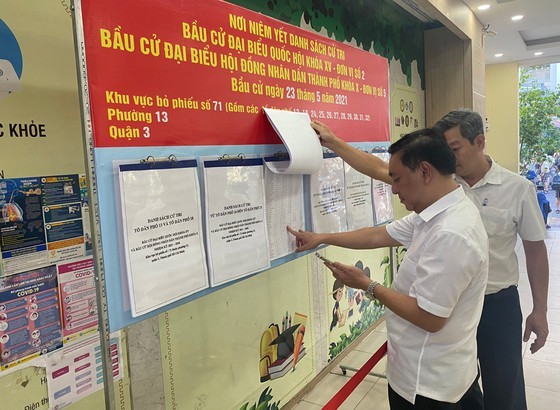 The leaders of District 3 are checking the posting of voter lists. (Photo: SGGP)

After posting the complete voter list on April 13, District 3 of HCMC introduced the corresponding online information portal at the address of http://quan3tphcm.gov.vn/cutri/tra-cuu so that residents in all 12 wards of the district can check their identity information (full name, permanent address, neighborhood number) and request adjustment if necessary. There is a QR code to scan for portal access as well.

“Normally, to check identity information or request information adjustment, a voter needs to visit the location having voter lists. Now that there is this more convenient way via an online portal, people can save much time”, said a resident in Ward 4 of District 3.

Until April 18, there have been over 28,000 visits to this portal, 242 of which asked for information adjustment and addition.

Aware of the large quantity of voters (more than 700,000 people) under its management, Thu Duc City has developed a map containing 360 voting locations for more efficiently monitoring and information updating.  The city also allocates a special room for election data input, equipped with the Metronet bandwidth (Metropolitan Area Network).

According to Chairman of District 12 People’s Committee, the district has 168 voting locations to serve over 342,000 voters. Along with offering the Metronet bandwidth, the district has developed a 3D design and a video clip to illustrate the voting procedure to its residents.

The HCMC Election Commission announced that the software to serve election tasks in the city is coming to its last development stage for the piloting time, following by the software training session as well as system and information checking before the big day.

Deputy Director of the HCMC Department of Information and Communications Vo Thi Trung Trinh said that this software will be used in all voting locations in HCMC. Thanks to its strong connection ability, it has powerful features such as printing voter IDs, cross-updating voter status and the voting procedure in all areas, counting the ballots. These pieces of information can then be used in result announcing and post-election reports of state agencies.

At the end of this April, the HCMC Information & Communications Department and Home Affairs Department are going to co-organize a training session for over 1,600 state officers to be fluent in this useful software.

Depyt Director Trinh affirmed that her organization will closely cooperate with all localities to check the quality of their Metronet bandwidth, video conference application in order to ensure the smooth operation during and after the election day. However, she stressed that the ballot counting task will still be done manually as regulated countrywide.

He also reminded the localities in all districts and Thu Duc City strictly observe the regulations regarding the content on voting ballots and voter IDs since there is not yet any legal corridor for this technological application.