Cars, coaches and buses are permitted to travel in the flyover. Meanwhile pedestrians, two and three wheeled vehicles, trucks and semi-trailer trucks are not allowed to use the overpass.

The Y-shaped overpass will run from Truong Son Street to the international and domestic terminals. The project was constructed at a cost of VND242 billion (US$10.7 million).
In addition, the first phase of the 367.7m bridge connecting Nguyen Kiem Street and Nguyen Thai Son Street was also opened. This section is one of the three branches of the flyover which is designed in the shape of the letter N, including another 367.7m bridge linking Nguyen Kiem Street to Hoang Minh Giam Street, and the third one measuring 362.8m long between Hoang Minh Giam Street and Nguyen Thai Son Street.
Vehicles weighing over 10 tons, pedestrian, non-motorized vehicles are restricted from traveling along Hoang Minh Giam-Nguyen Thai Son bridge. Cars, two and three wheeled vehicles are not allowed travelling from Dang Van Sam street to Nguyen Kiem-Nguyen Thai Son section.

The construction is hoped to help ease traffic pressure on the streets connecting to Tan Son Nhat International Airport. 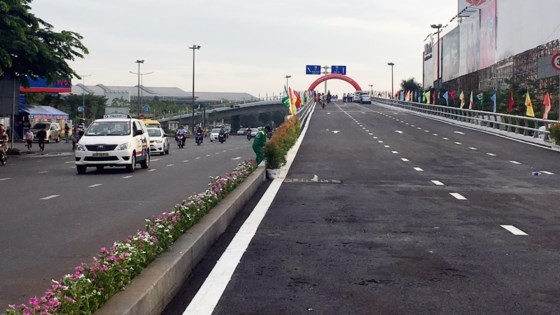