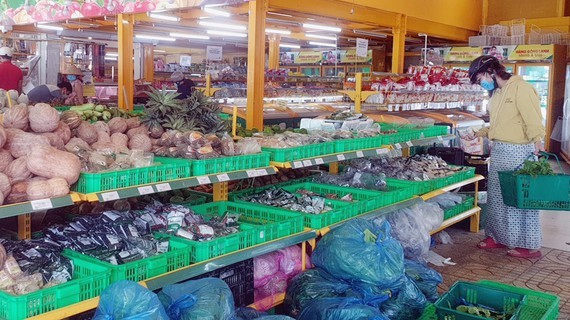 Vegetables at a supermarket in Go Vap
After the first week of using the grocery shopping tickets, residents of Go Vap District complained they could not always buy what they needed after waiting in line for hours. Since traditional marketplaces in Go Vap are not allowed to operate, people flock towards supermarkets and small retail outlets, causing fresh food to run out during peak shopping hours.

In some notable examples, local residents have reported that locations with quality fresh products usually run out of stock early, while some other places would quote fluctuating prices on essential goods.
Meanwhile in Binh Thanh District, people have enjoyed uncrowded grocery trips thanks to having scheduled shopping hours. According to a local official, there is an abundance of supermarkets in the area but not many people, hence such convenience.
Speaking with SGGP Newspaper on August 03, Deputy Director of the HCMC Department of Industry and Trade Nguyen Nguyen Phuong said the shopping tickets are meant to limit the number of people by each time frame to ensure social distancing as well as manage the supply flow. He stressed, however, that the execution does not need to be too rigid, and that each locality could make changes to the number of shopping locations allowed based on a number of factors.
He also added that there is no shortage of goods coming to HCMC but rather a lack of operational distribution channels. There are currently only 27 working traditional, mainly in the suburbs.
Meanwhile, retail outlets like supermarket chains and convenience stores are struggling to keep up with the number of shoppers with a reduced number of employees, many of whom are stuck in quarantine.
The HCMC People’s Committee previously directed its localities to make sure there is enough essential goods to go around, and requires cooperation from the local distribution channels to mobilize available means of transport for timely and continuous supply.