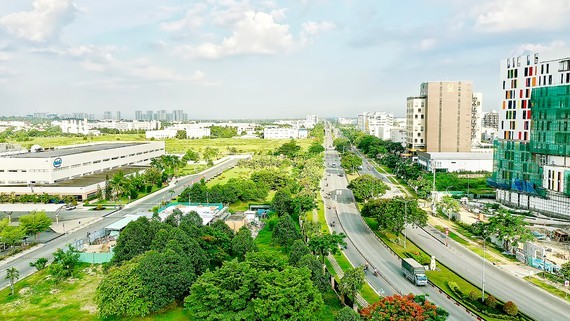 A corner of Thu Duc City
According to the plan, the Thu Duc City development project must propose specific mechanisms and policies that have not been regulated or are different from current regulations. The mechanisms should include human resource policy, finance – banking, enterprise and investment, land, natural resources and environment, construction, planning, and urban infrastructure.
Based on the mechanism, the city will propose to the Central Government for a favorable legal corridor to facilitate Thu Duc City’s development.
The municipal People's Committee assigned the Department of Planning and Investment to assume the prime responsibility for developing the outline of the Thu Duc City development project. Moreover, the Department should coordinate with the Department of Home Affairs to advise the People's Committee about a decision to establish a team working on the project.
The team will advise the city authorities about organizing scientific seminars, how to collect opinions from sectors, research organizations, and central agencies to complete the project and submit it to the competent authorities in Ho Chi Minh City and the Central Government.
The city's departments and agencies were also asked to assess the current socio-economic development of Thu Duc City with the aim to identify bottlenecks, and then propose specific mechanisms and policies to remove them.