The wagons will be lifted off and delivered to the Long Binh Depot in Thu Duc City.
The Japanese engineers and crew members were taken their samples for Covid-19 testing after arriving in Vung Tau last night. Afterwards, they all moved to Ho Chi Minh City. Kaisa was towed along the Long Tau River to Khanh Hoi Port.

It spent around two hours lifting the locomotives off the ship and placing them on special vehicles.

It spent around two hours lifting the locomotives off the ship and placing them on special vehicles.

Three of the wagons are expected to be transported to the Long Binh Depot in Thu Duc City by special vehicles at midnight on May 10.
After arriving in the depot, they will be installed in T1 railway to form the second train of Ben Thanh-Suoi Tien metro line. The third train will be installed in another railway.

According to Gemadept Logistics Company, a sub-contractor in charge of transporting the metro, the transportation route this time is similar to the first one with the total length of 26 kilometers following Nguyen Tat Thanh – Ton Duc Thang – Nguyen Huu Canh – Nguyen Co Thach – Mai Chi Tho – Hanoi Highway – National Highway No.1 – Road 400 – Hoang Huu Nam – Road No.11 to Long Binh Depot. 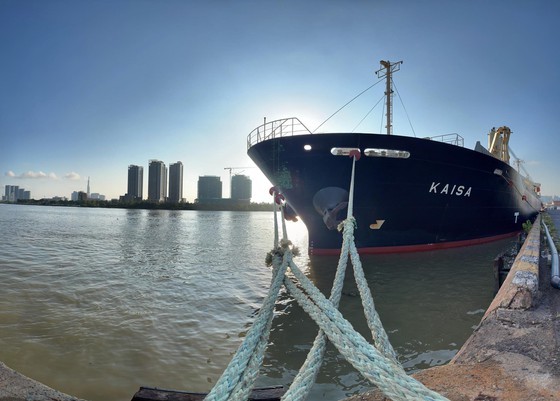 The Management Authority for Urban Railways (MAUR) informed that the transport of the wagons to HCMC for Metro Line No.1 marked the transmission step from the construction, installation to the trial process and operation.
In the upcoming time, the wagons will be step-by-step operated in trial processes at the depot, from the depot to Tan Cang (New Port) and the final step in the whole route including the trial run of 11 different systems, consisting electricity, signal and track systems, etc.