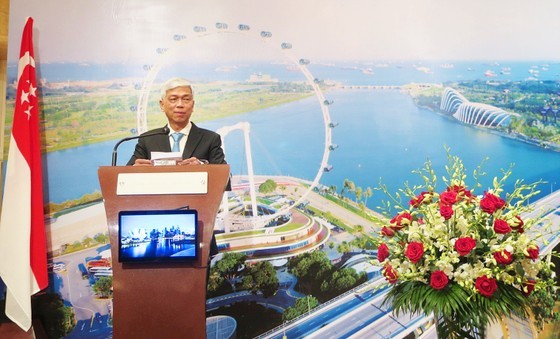 Vice Chairman of the municipal People’s Committee Vo Van Hoan delivers the remark at the celebration ceremony of Singapore’s 57th National Day on August 15. (Photo: SGGP)
Hoan delivered the remark at a ceremony to celebrate Singapore’s 57th National Day hosted by the Singaporean Consulate General in HCMC.
Congratulating Singapore on its National Day, Hoan said he was impressed by its robust development over nearly six decades. Singapore is now one of the world’s most developed countries and a role model with a pioneering approach – “dare to dream, look ahead and seek new solutions and opportunities.”
Built on the foundation of the flourishing relations between the two countries, HCMC-Singapore ties have produced good results, he said, noting that because of geographical proximity and cultural similarities, HCMC and Singapore boast great potential to supplement each other in various fields.
According to the official, Singapore has been HCMC’s largest investor and second biggest trade partner for years. Since 1988, Singapore has operated nearly 1,490 projects, worth about US$11.9 billion, in the Vietnamese southern economic hub. Last year, the bilateral trade reached close to US$8 billion despite impacts from the Covid-19 pandemic.
The two sides have maintained close cooperation in multiple areas, including education, public personnel training, urban planning, tourism and cultural exchange, he said.
Singaporean Consul General in HCMC Roy Kho Ngee Seng, for his part, said Vietnam-Singapore relations have always been growing strongly in all fields, from politics and economy to culture, national defence and education.
He added that as Vietnam’s biggest FDI source over the past two years, Singapore poured more than US$4.1 billion into Vietnam in the first half of 2022, accounting for 29.5 percent of Vietnam’s total FDI in the period. The figure is likely to rise further, he said.
The diplomat further noted that HCMC remains a promising destination for Singaporean enterprises which are looking to expand business in Vietnam. Singapore has invested in 70 projects with registered capital of US$116 million in HCMC in the first seven months of the year and registered to add US$1.14 billion to operational projects, making up 80 percent of the added FDI into the hub.
He said that Singapore has effectively cooperated with HCMC and southern localities in accelerating digital and green economy, expecting that the two sides’ partnership in digital economy and climate change response will bring more development opportunities for their business communities and people.