The city Party Chief sent a greeting of Vietnamese Prime Minister Nguyen Xuan Phuc to the counterpart. He sincerely thanked the Singaporean PM for the warm welcome as well as desired that the PM would visit HCMC in the forthcoming time.

On behalf of the delegation, Secretary Nhan congratulated Singapore on the 54th anniversary of National Day of the Republic of Singapore (on August 9, 1965- 2019) and he also appreciated the country's role in regional economy and security development.

Mr. Nguyen Thien Nhan expressed his pleasure at good, effective strategic partnership between the two nations in the fields of politics, diplomacy, defense, security, culture, education, science and technology. Additionally, the relationship between HCMC and Singapore continue to develop positively in many fields.
In particular, Singapore has been  the leading investor and the second largest trade partner of HCMC for many years.

Last year, HCMC lured more than 1,100 projects of Singaporean firms such as Keppel Land, Maple Tree, Ascendas, Capital Land, etc with a total registered capital of more than US$ 10.73 billion.

The total export-import turnover of HCMC and Singapore gained more than US$ 7 billion.

In tourism sector, the city received around 278,100 Singaporean tourists, an increase of 41.3 percent compared to 2017.

The purpose of the visit is to open new cooperative opportunities, seek solutions to remove the difficulties as well as prepare for the city’s development plans in the next 5-10 years.

Besides that, the city’s desire was to deepen the relationship between Vietnam, including HCMC and Singapore on the foundation of the bilateral strategic ties.

Mr. Nguyen Thien Nhan informed Ho Chi Minh City as the leading economic hub of Vietnam; however, it has been facing many challenges of planning and urban infrastructure following urbanization and population development.

HCMC is the most populous city in Vietnam with a current population of more than 10 million, increasing additional one million people every 5 years, impacting on transport infrastructure, housing, school, health, energy, job, fresh water and environment.

In the recent years, the city has braced for flooding, inundation and subsidence due to climate change. 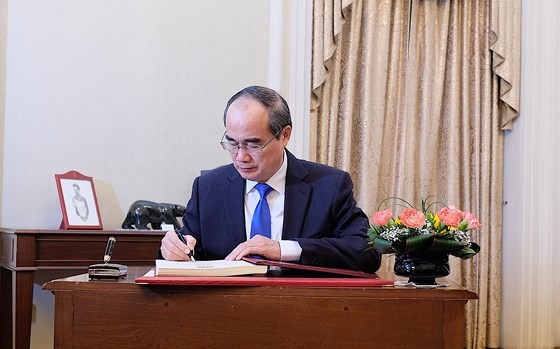 On the occasion, the city leader also proposed specific cooperation contents between HCMC and Singapore such as rotation for chairmanship of ASEAN conferences on sustainable urban development, especially climate change; shared experiences about creative startups including kicking off creative startup fairs along with discussion and signing memorandum of understanding about urban planning and development, human resource training to meet international standard.
Secretary Nguyen Thien Nhan also informed to PM Lee Hsien Loong about agreement of Singaporean Education Minister Indranee Rajah for signing a cooperation agreement between HCMC and Singapore  in human resource training.

According to PM Lee Hsien Loong, his country always appreciates the relationship with Vietnam, including Ho Chi Minh City since both became members of the ASEAN Smart Cities Network (ASCN).

The two nations are close partners. More and more Singaporeans arrived in HCMC for tourism and business investment.

The PM proposed to invite other cities such as Malina (the Philippines), Bangkok (Thailand), Yangon (Myanmar), etc to participate in the events.

Regarding the cooperation between Ho Chi Minh City and Singapore, he supported Singapore’s relevant agencies to continue discussing and signing the memorandum of understandings proposed by Secretary Nguyen Thien Nhan.

The Singaporean leader also expressed his impression on HCMC’s development via his recent working visits. As this reason, Singapore wants to further promote the comprehensive cooperation relationship with HCMC in particular and Vietnam in general.