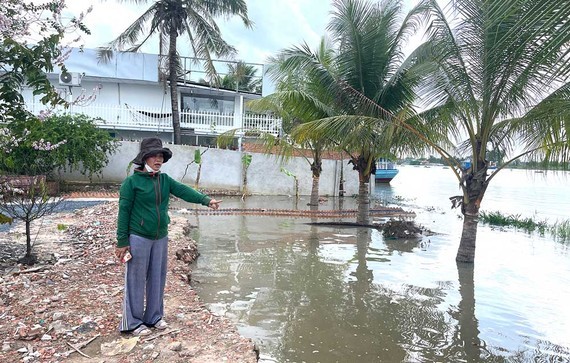 The land lot of Pham Thanh Huong is eroded, but is not allowed to reinforce due to complicated administrative procedure

One day at the end of this June, inhabitants of Hamlet 3 in Binh My Commune of Cu Chi District suddenly heard a bang. Rushing out of their house, they frightenedly saw a 20-meter-long and 3-meter-wide section of the current embankment being eroded by the river. For fear of this incident could threaten their life, these people worked with the local authorities to temporarily reinforce this embankment with coconut piles and sand. The section next to it is also subsided by nearly 20cm compared to the road surface, almost separating itself from the whole embankment.

Facing a similar downgraded state is the embankment section passing Nhi Binh Commune of Hoc Mon District, now having a lot of potholes. More troublesome is that the dike along Ba Hong Channel to prevent high tides at present is too low to perform its function. Nguyen Trong Hoang from Nhi Binh Commune worriedly said that because nearly all 20 sluice gates on this channel are damaged, local people have to temporarily reinforce them with wooden planks and use their own materials to heighten the dike before each rainy season.

Not far away from the dike, the section of Saigon River embankment passing Neighborhood No.8 in Nhi Binh Commune is enduring erosion, but residents here are now allowed to self-reinforce it, resulting in land loss by the river day by day. In particular, 100m2 of the land lot of Pham Thanh Huong, a local person here, has been loss.

It is explained that since the operation of An Son Port in Binh Duong Province, many high-capacity ships have used the route near this area and made strong impacts on the water flow, leading to faster erosion.

“Feeling so anxious of this land loss, I asked the leaders of my commune for a permission to reinforce the ground. Seeing that to be granted a formal approval, I need to hire a consultation unit, a professional designer for this construction, which is too complicated and time-consuming for me, I decided to hire a building contractor to reinforce the land myself, but was then requested to stop. A few days later, my land was eroded, with no one to blame!” said Ms. Huong angrily.

Vice Chairman of Cu Chi District People’s Committee stressed that current repairs of the local authorities and citizens are only temporary. If only there were a specific unit to be in charge of this task, it would be much more effective.

In 2021, HCMC People’s Committee agreed the maintenance and repair of downgraded sections of the embankment along Saigon River in Thanh Loc Ward of District 12 and Nhi Binh Commune of Hoc Mon District, especially damaged sluice gates to prevent high tides. This project is worth over VND6 billion (US$256,000).

The HCMC Department of Agriculture and Rural Development stated that the completion of Saigon River embankment has greatly contributed to flood prevention for safer agricultural activities. However, due to problems in administrative procedures, its investor could not request a construction final examination, and thus unable to hand in the project to functional units for maintenance. 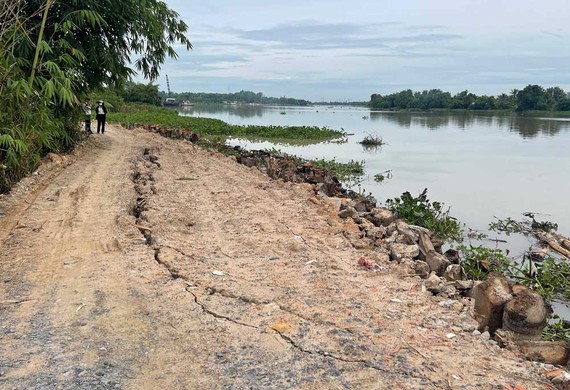 Building on weak ground, after many years, the embankment has become deformed compared to the original design. At present, while waiting for the project hand-in, the above department assigns its Irrigation Divisions and Water Service Management One-member Co. Ltd. to cooperate with the local authorities to frequently check sensitive spots on the embankment for timely reinforcement. Yet these are not professional maintenance units, so their work is not up to expectations.