Lately, condominiums and buildings have been sprouting up in districts in the southern metropolis placing pressure on the living environment. New residential area development has created negative impacts, including pressure on existing infrastructure and services, reduced environmental amenity, and slower residential price rises. 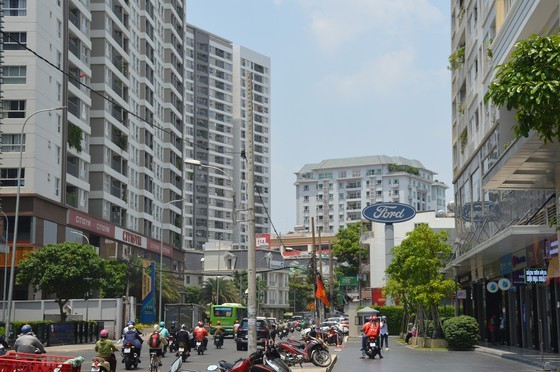 Rising high-rise apartments put infrastructure under pressure in HCMC (Photo: SGGP)
The growth of modern high-rise buildings significantly affects the existing climatic conditions of the terrain and the environmental balance of the living environment.

Long lines of people and vehicles have been seen in Pho Quang street at rush hours. About 5 years ago, scores of high-rise buildings including the Sky Center, Golden Mansion and The Botanica were built in the street. Worse, 18-floor Orchard Garden building and 24- floor Orchard Park View are located in Hong Ha Street nearby.
A 3.2km-long street connecting Sai Gon Bridge in Dien Bien Phu Street in Binh Thanh District to Ton Duc Thang Street in District 1 is the location of two high-rise buildings Saigon Pearl and The Manor.
Resident Hoang Thanh in Nguyen Huu Canh Street in Binh Thanh District warned that rapid and often unplanned population growth is often associated with population demands that outstrip infrastructure and service capacity and leading to environmental degradation.
Not only inner areas in HCMC but outlying districts are under huge pressure because of property boom. For instance, the newly-established Thu Duc City has been under pressure because of the completion of Vinhomes Grand Park project with 10,434 apartments not to mention a 271-ha project including 400 villas; 1,600 houses and a 40,000- apartment building. Traffic congestion in Nguyen Xien has been getting worse since the middle of 2020 when residents moved to live in Vinhomes Grand Park.
At a meeting of the city People Council recently, many delegates voiced concerns that roads in the inner city are increasingly overloaded by high-rise buildings and housing projects.
According to Architect Ngo Viet Nam Son, currently the infrastructure conditions including water supply and drainage services, traffic, schools and hospitals in the inner districts have been stable. If there are more high-rise projects, the infrastructure will be overloaded. Therefore, the city authorities should tighten their management on construction of high-rise buildings in inner areas and prioritize property projects in suburbs instead.
Moreover, the city’s authorities must tighten control over real estate projects to make sure that the traffic infrastructure can withstand the pressure posed by apartments and their residents.