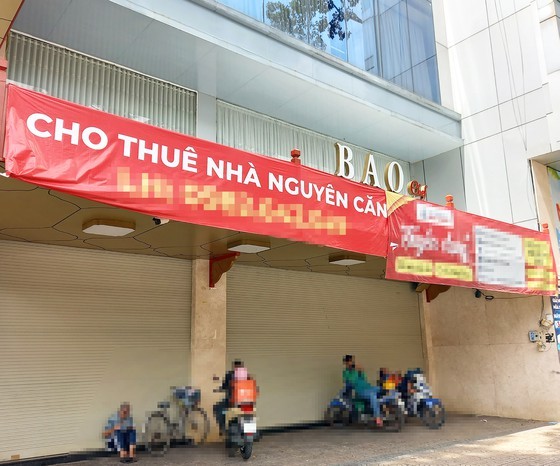 Rental market in HCMC sees uptick
After a long time affected by the Covid-19 epidemic, many renters were able to benefit from price reductions but now housing demand spiked. Many investors have demanded to rent premises in the center of the southern metropolis such as in District 1, and District 3.
The rent of business premises with an area of 60 square meters - 100 square meters on some main roads in District 1 such as Le Thanh Ton and Ly Tu Trong streets is about VND200 million a month while renters must pay VND80 to VND200 million per month for a premise in Nguyen Thi Minh Khai Street.
Mr. Ha Van Chinh, a real estate broker, said that he has a premise in Tran Hung Dao Street in District 1 for rent and many investors have come to ask for rent. However, many tenants are still waiting for the landlord to offer a good price, because in the current situation when many commodities’ prices are escalating, they necessarily consider carefully before starting a business.
Not only has the demand for space increased, but the market has also witnessed an increase in the price of premises, especially the hot roads in the center of districts, which are likely to well do business. Mr. Pham Van Dan, a broker of a real estate company based in Binh Thanh District, said that he has been busy looking for premises for customers.
Additionally, he revealed that rents have been increasing day by day. For instance, he said, from Tet until now, the price of major roads has increased by about 20 percent.
Streets with good business potential such as Le Quang Dinh and No Trang Long in Binh Thanh District, Phan Dinh Phung and Ho Van Hue in Phu Nhuan District have rental prices from VND30 million to VND40 million a month for a house. Some landlords sometimes have offered reasonable rent; thus, brokers and tenants will compete with each other, said Pham Van Dan.
According to a survey, 90 percent of buildings in District 1 such as Saigon Center on Le Loi Street, and Diamond Plaza on Le Duan Street, have been recently leased. Similarly, other buildings such as Vietcombank Tower in Me Linh Square with an area of 44,000 square meters and Sun Wah Tower in Nguyen Hue Street with 18,000 square meters, and M Plaza in Le Duan Street with 25,000 square meters are not empty.
A recent report by the multinational real estate consulting company Knight Frank Vietnam has shown that the office occupancy rate in Ho Chi Minh City in the first four months of the year has reached the pre-pandemic levels. Currently, the average rent for Grade A offices is US$55.31 per square meter. The highest price is in the central districts with a price of $62.54 per square meter while in the southern part of the city it is $32.78 per square meter. In the Grade B office segment, the average rental price is $34.03 per square meter and offices in the downtown area have higher rents approximately $43.37 per square meter.
According to Cho Tot Nha real estate trading and leasing website, from the end of March until now, the trend of working directly at the office has gradually been applied by companies and businesses again. Service activities are fully reopened, the number of advertisements for office rental and also business premises has increased.
Demand for office space subsequently increased. The website also revealed renters have paid the most attention to premises in districts Binh Thanh, Go Vap and Tan Phu. Meanwhile, the market report of Batdongsan.com.vn shows that the number of private houses for rent in the second quarter of 2022 in the city increased by more than 30 percent compared to the first quarter of 2022. There’s been a high demand for renting houses on big streets.
Ms. Tran Pham Phuong Quyen, manager of the retail space leasing department of Savills Vietnam, said that in Ho Chi Minh City, from the beginning of 2022, investors have been seeking premises for opening mini-market, fashion stores, and outlets for accessories because of increasing consumption helps retailers' businesses to recover. Businesspersons feel more confident to expand the system of stores and agents throughout the districts, so they need to find new locations, instead of downtown areas.
In addition, after the pandemic, new retailers such as Novamart and Fujimart flocked to the Southeast Asian country, making the rental market more vibrant, and the absorption rate gradually improved. On the other hand, thanks to the successful control of the epidemic, a series of positive solutions from opening international routes, tax reduction policies, the recovery of purchasing power, and the return of business and shopping activities to normal. Premises are therefore the key sales channel of retailers.
In terms of supply, the city currently has more than 1.5 million square meters of retail space. According to the forecast of Savills Vietnam, in the remaining months of 2022, it is expected that more than 90,000 square meters of space will be put into operation, 74 percent of which will come from projects outside the city center. With the positive signs of the economy, many large tenants and foreign tenants will participate in the market because Ho Chi Minh City is still a favorite destination for new tenants.