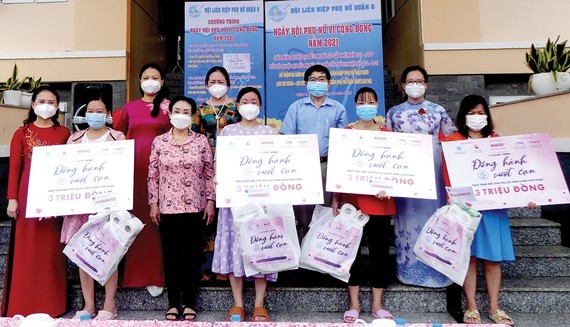 At the ceremony
This program was initiated by the SGGP Newspaper, with the coordination of the Women's Union, the Midwifery Association of Ho Chi Minh City and the companionship of PNJ Company, and the city Women Entrepreneurs Association.
Associate Professor Truong Thi Hien, Chairwoman of the Women's Intellectual Association of Ho Chi Minh City, one of the sponsors of the program was touched saying that at the gift-giving ceremony that taking care of poverty-stricken pregnant women during the epidemic not only help them give birth easily but also a good start for healthy babies – good citizens who will greatly contribute to the building of a smart city.
Ms. Hien also highly appreciated the Women's Union of District 8 for its meaningful welfare activities, through which many difficult dwellers have the opportunity to receive support for their better lives.
On this occasion, the Women's Union in District 8 gave gifts to 100 lonely elderly people, 200 district women's members in difficulty, and gave 80 scholarships to students in the area.

Poor pregnant women building of a smart city SGGP Newspaper with the coordination of the Women's Union the Midwifery Association of Ho Chi Minh City PNJ Company and the city Women Entrepreneurs Association.