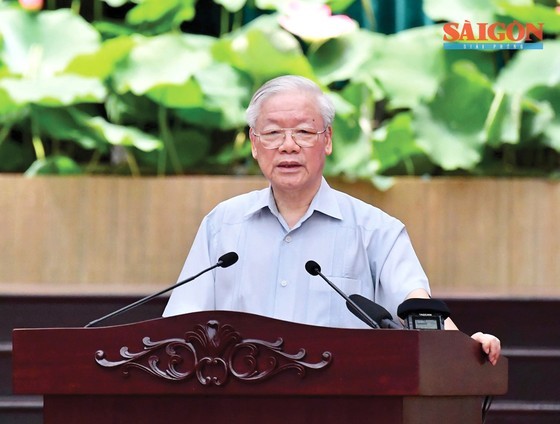 Party General Secretary Nguyen Phu Trong speaks at the meeting on September 23. (Photo: SGGP)
At a working session with him during his working visit there, the Standing Board of the municipal Party Committee reported on the implementation outcomes of the resolutions adopted at the 13th National Party Congress and the 11th municipal Party Congress.

It proactively issued a resolution for the recovery period as soon as HCMC had basically brought the Covid-19 pandemic under control. Its Standing Board also ordered the issuance of a local socio-economic recovery and development program for 2022 - 2025. 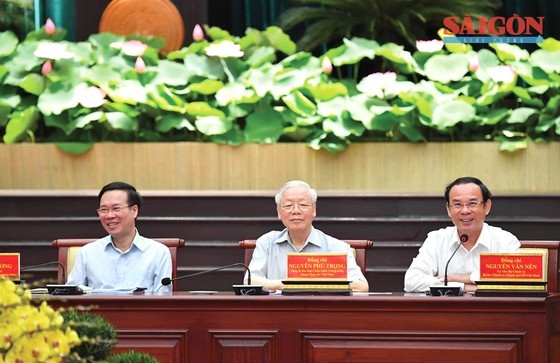 Party General Secretary Nguyen Phu Trong at the meeting with the HCMC Party Committee on September 23. (Photo: SGGP)
As a result, the city posted economic growth of 3.82 percent in the first half of 2022, a rate expected to reach 9.71 percent in the first nine months. It has enjoyed fair growth in foreign trade, strong recovery in trading, services, and tourism, and US$2.91 billion in FDI attraction so far. Encouraging outcomes have also been recorded in cultural and social affairs, health care, education - training, science - technology, Covid-19 response, defense - security ensuring, and foreign relations. 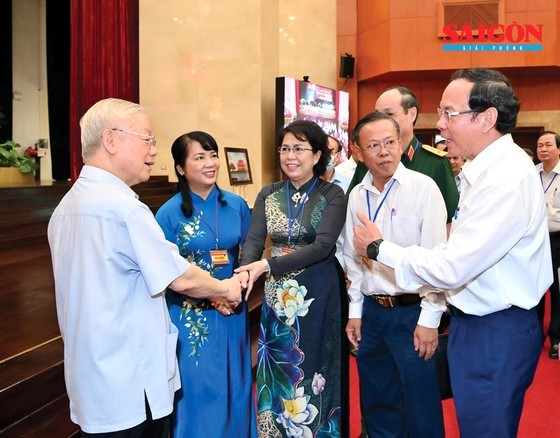 Party General Secretary Nguyen Phu Trong greets HCMC officials at the meeting on September 23. (Photo: SGGP)
Applauding efforts and achievements by the local Party Organization, administration, and people, General Secretary Trong said with its outstanding potential, advantages, attractiveness, and competitiveness, HCMC should further step up reforms, exert stronger efforts, and bring into better play its role as the biggest development driver for the southeastern region and the whole country.

The leader once again expressed his sympathies with the people of the city and the whole region over the huge and unprecedented losses caused by the Covid-19 pandemic.

He demanded full and proper awareness of the city’s potential, outstanding advantages, and its particularly important position and role in the national reform, development, and defense, as well as in the development of the southeastern region. 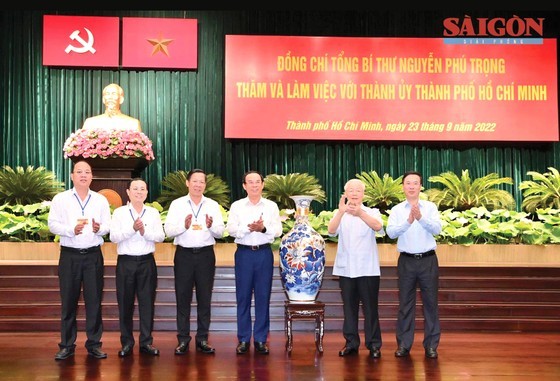 Party General Secretary Nguyen Phu Trong gives a gift to the HCMC Party Committee. (Photo: SGGP)
To successfully make strategic breakthroughs and tackle bottlenecks in terms of regulations, infrastructure, and human resources, the leader pointed out the necessity to further promote economic restructuring in combination with growth model reform, and enhance the city’s capacity and the quality of institutionalizing and implementing the Party’s guidelines and the State’s laws in a way appropriate to the local situation and conditions.

The city should prioritize the creation of stronger breakthroughs in its urban infrastructure and the building of a high-capacity public transport system, as well as improve the current transport situation and work out more fundamental solutions to deal with problems on environment, climate change and rising sea level, he stressed.