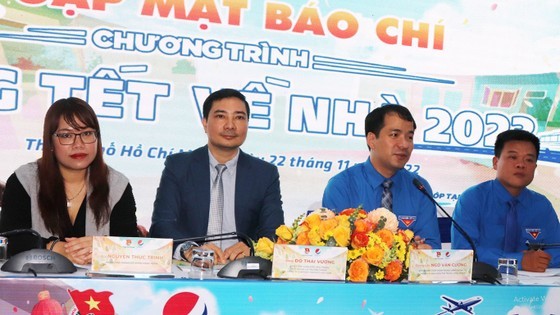 At the launching ceremony of the “Bring Tet home" program
The program called “Bring Tet home" will present 556 return air tickets, including 360 tickets on domestic flights and 196 others on international routes, 3,600 round-trip bus tickets and Tet gifts to over 4,000 poor workers and students, especially teachers of kindergartens and primary schools, healthcare workers who have not planned to return their hometown for many consecutive years.

The event was launched at the HCMC Youth’s Cultural House on November 22 by the Central Youth Union and Suntory Pepsico Vietnam Beverage Company.
Speaking at the event, Secretary of Ho Chi Minh Communist Youth Union (CYU) Central Committee, Ngo Van Cuong said that the program aims to take care of disadvantaged workers and students, especially Vietnamese people who are working and studying in Japan to have a chance to return homeland for family reunion on Tet holidays. 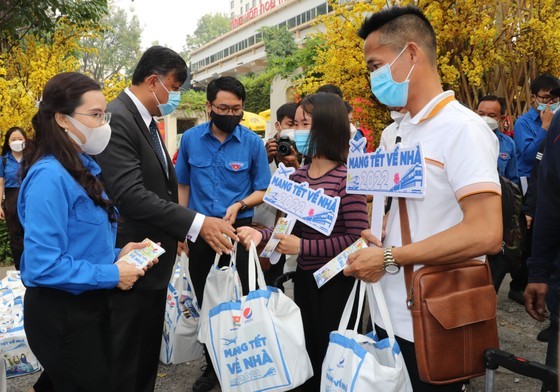 The program will offer more than 4,000 bus and plane tickets to low-income workers and disadvantaged students.
People aged 18-40 who are living in the northern and central localities, studying and working in HCMC, Dong Nai and Binh Duong provinces can create a registration form at the website mangtetvenha.doanthanhnien.vn from November 22-December 25, or contact with the Youth Unions of HCMC, Dong Nai and Binh Duong provinces, and the phone number 1900.999.960 for more information.
The first buses will be operated from the beginning of January, 2023 while the peak time of the program will fall from January 18, 2023.
In addition, the organization board has continued to coordinate with the mobile payment application, ZaloPay to call on individuals, collectives and businesses to support the “Bring Tet home” fund to offer additional bus tickets for needy workers and students.
Two years after launching, the program has presented 1,592 return air tickets, 4,953 round-trip bus tickets and 290 return train tickets to disadvantaged workers and students.