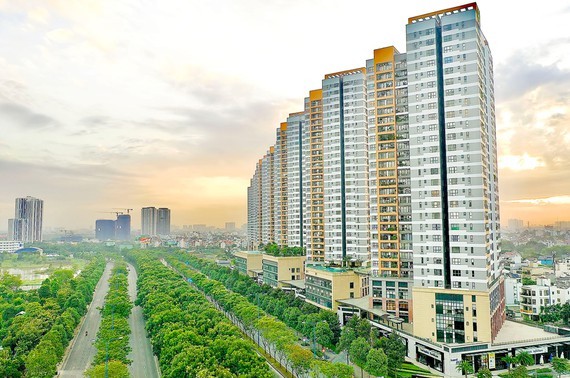 Nguyen Hung, a resident of the Florita apartment building in District 7’s Tan Hung ward was upset because after five years of buying the house, he and other residents in the apartment building still have not been granted apartment ownership certificates. Because they do not have apartment ownership certificates, people can’t mortgage to borrow money from the bank to do business.
A representative of the Ho Chi Minh City Department of Natural Resources and Environment revealed that this project investor has not yet fulfilled its additional financial obligations due to the adjustment of the project scale. In order to have a basis for granting title certificates, the investor must fulfill financial obligations and submit a dossier at the Department of Natural Resources and Environment according to regulations.
Meanwhile, residents at Screc II apartment building in Thu Duc City’s An Phu ward asked the apartment has been handed over since 2014 but they have not been granted pink books, a legal document that you should secure as proof of ownership when buying real estate. The investor blamed the departments for causing difficulties in the procedures for issuing pink books.
A representative of the Ho Chi Minh City Department of Natural Resources and Environment explained that the Screc II apartment project in the area of 131ha had previously been granted a land use right certificate by the Department of Natural Resources and Environment for the Housing Trading One Member Company Limited. Housing Business Development Joint Stock Company has transferred the above land to Saigon Housing Business Investment Joint Stock Company under a contract in 2006. Because the House Trading One Member Limited Liability Company has been equitized but has not yet settled its financial obligations, it is not possible to consider granting an apartment title.
Regarding the issuance of certificates of ownership of houses and other properties attached to land (pink book), a series of apartment buildings in Ho Chi Minh City, despite being in use for many years, have not been issued for many reasons such as construction building illegally, not fulfilling financial obligations; for example, Hong Linh apartment building in Trung Son area in Binh Hung Commune in Binh Chanh District, 4S Riverside Linh Dong apartment (4S apartment), Thuan Viet apartment building in Thu Thiem urban area in Thu Duc City.
Mr. Pham Ngoc Thu, a resident of Hoa Phuong apartment building in District 12 complained currently, the apartments and corridor areas in the apartment building have been stripped of bricks, and the plaster ceiling of his apartment has collapsed. Residents asked the investor for a warranty but were refused. Many times residents have submitted applications to the authorities, which have not been resolved.
In response to this, Representative of the Ho Chi Minh City Department of Construction Dang Thanh Xuan said that for an apartment building that is still within the warranty period in accordance with the law on housing, residents should contact the management board of the apartment building to list degraded or damaged items, requesting the investor to perform warranty and repair according to regulations.
Residents at Phu Hoang Anh apartment building, Phuoc Kien commune, Nha Be district reflect that currently, all maintenance fees of more than VND46 billion have been transferred to personal accounts by the old management board. The new management can’t use this money in the maintenance and operation of the apartment building, even though the apartment building is degraded or damaged. The bank keeping this money explained that because of the personal account, the management board could not take it according to the provisions of the law.
Lawyer Le Trung Phat, Ho Chi Minh City Bar Association, instructed that, according to the provisions of the Law on Housing, when the management board opens an account to receive maintenance fees from the investor, it must set up an account in the name of the management board. , can't open a personal account. It is against the law for the old management board to open a personal account to keep maintenance fees. The old management board's act has shown signs of the act of ‘Illegal possession of the property' under Article 176 of the Penal Code. Therefore, at this time, the management board should file a ‘criminal denunciation’ to the Ho Chi Minh City Police for investment.