Many districts in Ho Chi Minh City in recent years have created official pages on social media and built online applications to better interact with the people.

A woman at Ward 8, Phu Nhuan District expressed satisfaction when her photographic report of an illegal garbage dumping site was resolved after just two hours of her posting about it on the ward’s local app.

Previously in District 9, a construction project owner barricaded an entrance to a residential area due to security concerns, forcing people to take the long way around. After citizens filed complaints to the district’s official Zalo account, local officials promptly reached an agreement with the owners and have the path opened up again. 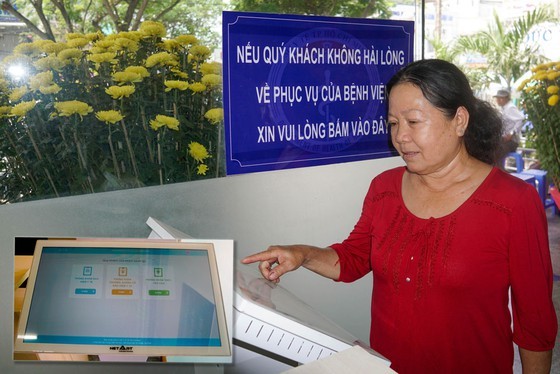 A customer feedback kiosk at a central hospital in HCMC

The Chairman of District 12 People’s Committee said they took advantage of existing platforms that people already frequent instead of building independent apps, hence their initial success in resolving complaints.

Reality has shown that most public disturbance reported throughout the year have not been resolved in a satisfactory manner, especially ones related to pollution or land ownership. “There is nothing that people want more than being heard carefully”, he said.

Previously, hospital goers wanting to voice their gripe had to contact a call center or fill in a complaint form. Now, they only need to push buttons at customer feedback kiosks in the hallway.

Their comments are then immediately sent to the hospital’s board of directors or responsible departments, and recorded at the Department of Health.

The kiosk system after more than 3 years of implementation has helped hospitals improve service quality immensely. Many major hospitals since then have built their own apps to receive patient records and speed up the waiting list.

Experts stated that online channels benefit greatly in terms of encouraging interactions thanks to transmission through images. They also prompt local officials to attempt to resolve complaints in a timelier fashion.