Secretary of Ho Chi Minh City Party Committee Nguyen Thien Nhan made the statement at the 12th Congress of Nha Be District Party Committee for the 2020-2025 tenure. He analyzed that service sector today comprises a growing proportion of Nha Be’s economic structure but because district leaders have not paid enough attention to the sector, its spontaneous development has not been as expectation.

In addition to setting up a 4.0 hi-tech service area, he stated that the district has to expand land for public infrastructure construction, land for parks, for traffic and upgrade grass-root medical facilities..
Mr. Nhan acknowledged and hailed the Party committee, the administration, and residents in Nha Be District for gaining achievements which will greatly contribute to the district’s future growth.

He praised the district’s several achievements such as economic growth of 12.14 percent and service growth of 12.53 percent during five years. Additionally, the district has undertaken numerous economic tasks including collecting more taxes, building infrastructure, developing new urban area and undertaking land management closely.
Alongside with this, the district has eradicated “blackspots” of garbage dumping areas by encouraging residents not to throw away litter in streets as per the resolution 19-CT/TU to satisfy 19 out of 19 criteria in following the government’s new rural plan.

However, the city Party Chief also pointed out the district’s weakness namely average per capita income of the district just VND65 million (US$ 2,786) whereas it must be VND76 million as per plan.
Mr. Nhan added that according to market orientation, leaders must take heed of industrial service orientation, industry development policies, and mechanisms to grow job training and services. Moreover, he proposed district leaders to pay more attention to statistics on labor productivity- a pivotal factors.

In the district’ economic structure, agriculture accounts 1.9 percent and will decline more in the future. A town-level district can’t be dependent on agriculture, he emphasized; therefore, Nha Be must take land use management and infrastructure re-planning into account to rise into a town-level district.
According to Party Chief Nhan, urban-oriented planning goes along with good traffic system, parks, schools and entertainments to improve residents’ living condition. To upgrade a suburban district into a town-level district, Nha Be leaders must take heed of production, business and people’s living condition.
When it came to solutions to upgrade a suburban district into a town-level district, Mr. Nhan mentioned setting up an economic development council like the Netherlands and Germany. The economic development council is comprised of entrepreneurs and economists who will voice their opinion on which fields the district should take heed to and how to do.
What’s more? Mr. Nhan stressed on administrative reform in Nha Be District in the next time. Presently, the district has done well when it connected smart city plan with administrative reform; accordingly, he proposed Nha Be to strengthen planning management as well as construction investment and launch more movements amongst people. 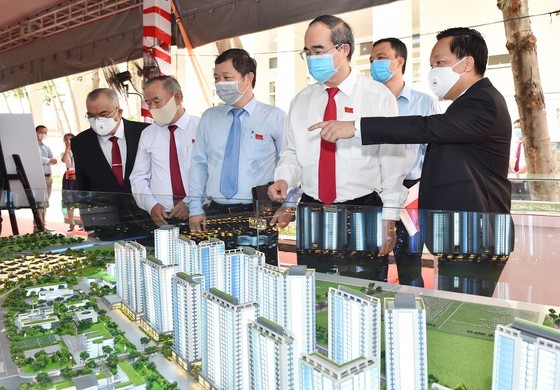 Chairman of Nha Be District People's Committee Hoang Tung  ( first, R) is talking about the district's planning to Mr. Nguyen Thien Nhan ( second, R) (Photo: SGGP)
He highly valued Nha Be’s idea to add happy family building criteria into the party committee congress document. Nha Be is the first district to include this criteria in party committee congress document. He noted participation of the fatherland front and unions to achieve the new criteria. Furthermore, he said housing, income, education, entertainment and taking care young generation should be taken in account, too.