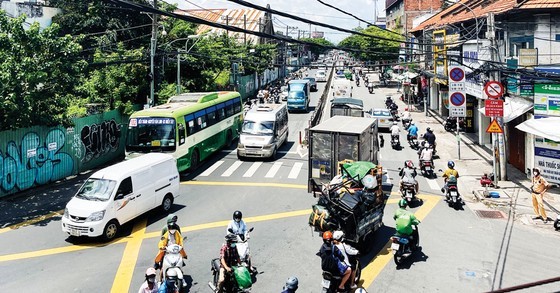 With the total length of 3km and a width of 14m, Nguyen Tat Thanh St. has two lanes for each traffic direction to accommodate cars, trucks, container trucks, and 2-wheel vehicles. At rush hours, the street frequently witnesses severe traffic jams. At off-peak hours, the street is also used by a large volume of vehicles. It is exceptionally dangerous or sometimes impossible for fire trucks or ambulances to move on the street for emergency cases.

Duong Thi Thanh Thuy, living on Huynh Tan Phat Street in District 7 and a regular user of this street to go to work in District 1, shared that it normally takes her 20 minutes to get to work, but at rush hours the time could be a double or triple.

Truck driver Le Van Lam, who usually uses the street to transport cargoes to and fro Tan Thuan Export Processing Zone, complained that Nguyen Tat Thanh Street is always crowded, regardless of the time of the day.

Nguyen Hoang Viet, a resident on the street, expressed his concern that he has heard about a street expansion plan towards Khanh Hoi Port for 5 years, yet could not understand why it has not turned to reality yet. People like him feel so tired of the noise and dirt volume each day, let alone traffic jams.

He suggested that an expansion of 2-3m wide can greatly address the congestion situation here. Also, the intersection between this street and Ton Dan Street is often stuck because of the limited width. Therefore, an expansion towards the port would solve the problem.

Vice Chairman of District 4 People’s Committee Vo Thanh Dung informed that in 2015, HCMC People’s Committee approved the 1/500 planning for the port section in District 4 (including the wards of 12, 13, and 18). Accordingly, Nguyen Tat Thanh Street is expanded with a building line of 37-46m from the street central line.

However, this planning affects the task of issuing construction permits, house owning certificates, land use right certificates. District 4 then proposed an expansion with a building line of 16m from the street central line. The building line near the port is still the same as the detail in the 1/500 planning.

This proposal was approved, and in 2016, the HCMC Planning and Architecture Department was assigned to cooperate with the HCMC Transport Department, District 4 People’s Committee to work with the investor of Nha Rong – Khanh Hoi Complex, Vien Dong Pearl Urban Development Investment Co. Ltd., for corresponding adjustments. The company was in charge of street expansion.

Ngo Hai Duong, Head of the Office for Road Infrastructure Management and Exploitation under HCMC Transport Department, said that the port has encountered land clearance problems due to public land use of central units. Ar present, to address traffic congestion, the HCMC Transport Department hopes that the port allows the temporary use of empty lots here for street expansion. He added that even with land clearance being completed, the department still finds no sufficient fund to start the expansion project.